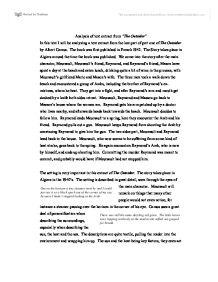 Analysis of text extract from "The Outsider" In this text I will be analyzing a text extract from the last part of part one of The Outsider by Albert Camus. The book was first published in French 1942. The Story takes place in Algiers around the time the book was published. We come into the story after the main character, Meursault, Meursault's friend, Raymond, and Raymond's friend, Mason have spent a day at the beach and eaten lunch, drinking quite a bit of wine in the process, with Meursault's girlfriend Marie and Mason's wife. The three men took a walk down the beach and encountered a group of Arabs, including the brother of Raymond's ex-mistress, whom he beat. They get into a fight, and after Raymond's arm and mouth get slashed by a knife both sides retreat. Meursault, Raymond and Masson go back to Masson's house where the women are. Raymond gets his arm patched up by a doctor who lives nearby, and afterwards heads back towards the beach. Meursault decides to follow him. Raymond leads Meursault to a spring, here they encounter the Arab and his friend. ...read more.

Camus may be trying to put forward the ideas that there are opposing forces fighting over the fate of men, or, something which I think is much more likely given Camus known views on such things, that mankind has the power and liberty to chose, but once one has made a choice there is no going back. To contrast the sun and the heat is the spring, which the main character seems to be heading for. The sun is portrayed as merciless and overbearing. Whereas the spring cool and refreshing, the use of the halo gives connotations of sanctuary, paradise or heaven. This of course is a bit sardonic, as when he comes to this "paradise" he finds what will ultimately lead to his downfall, the paradise was a joke. This may reflect on Camus views on the relationship between society and religion. To further the idea that Meursault is now doomed to the fate he chose, the way the setting is described before he shoots the Arab is apocalyptic, foreseeing the end of Meursault's world as he knows it. ...read more.

Can it really be a coincidence that he goes back to the spring, the Arab is still there and Meursault just happens to have a gun. Is it fate, or maybe the absurdity of life? Camus could be trying to tell the readers that life is but one odd event after another, a string of absurd coincidences that in the end determine one's life. Meursault claims the sun made him kill the Arab. Was it just by chance that Meursault grew to have such a sensitivity to light, or had fate predestined his doom. It is the lure of the spring that brings Meursault to the Arab at first. Camus uses a lot of description, of the setting, and the characters between actions dragging out the moments and building suspense. This text extract is from the end of part one of The Outsider; the killing of the Arab is only the start, the spark that sets off the downfall of Meursault. It is the foot that slips and the whole bolder comes tumbling down in the Myth of Sisyphus. In part two Meursault is put to trial for the murder, but is judged more for his apparent lack of grief at his mothers death, as this is wrong in the eyes of society. ...read more.