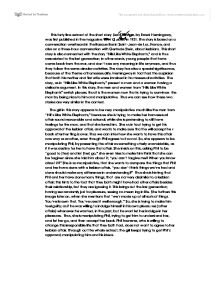 This forty line extract of the short story Sea Change, by Ernest Hemingway, was first published in the magazine This Quarter in 1931. The story is based on a conversation overheard in the Basque Bar in Saint-Jean-de Luz, France, and also on a three-hour conversation with Gertrude Stein, about lesbians. This short story is also connected with the story "Hills Like White Elephants," and is thus associated to the lost generation; in other words, young people that have come back from the war, and don't see any meaning in life anymore, and thus they follow the same circular activities. The story has also a special significance, because of the theme of homosexuality. Hemingway in fact had the suspicion that both his mother and first wife were involved in homosexual activities. The story, as in "Hills Like White Elephants," present a man and a woman having a delicate argument. In this story, the men and women from "Hills Like White Elephants" switch places; thus it is the woman now that is trying to convince the man by being nice to him and manipulative. Thus we can see how these two stories are very similar in the context. The girl in this story appears to be very manipulative much like the man from "Hill's Like White Elephants," because she is trying to make her homosexual affair sound reasonable and rational; while she is pretending to still have feelings for the man, and that she loves him. ...read more.

We can see his jealousy when he expresses her homosexual affair as a "vice2 and a "perversion." He thus quotes a famous quote by Alexander Pope: " Vice is a monster of such fearful mien" "that to be something or other needs but to be seen. Then we something something, embrace." Here, apart from his jealousy, we can see how the men has poor culture and education, since he can't remember the complete phrase: "Vice is a monster of such frightful mien, /As to be hated needs but to be seen;/Yet seen too oft, familiar with her face,/We first endure, then pity, then embrace." Apart from his jealousy, and selfishness, we see that this last phrase by Alexandar Pope, may hint to the man's relationship with the girl, and how disastrous it is, based on vices, that they both share, and nothing else. So, the men appears to be sharing similar vices as the girl, even more probably; however, he doesn't want the girl to have her own pleasure, thus he is shown as selfish and jealous. The other characters in this story; James the barman, and the other two drinkers, show us another perspective on the conversation between the man and the girl. They set the context in an indifferent world, were nobody cares about anything, and everything is meaningless. During the conversation between the man and the girl, the barman "at the far end of the bar" is watching them, and Hemingway, gives us a glimpse into his mind: "He knew these two and thought them a handsome young couple. ...read more.

The only adjective here used is "white," and this itself is a very simple adjective, still emphasizing this idea of the simplistic style. Finally, in this story Hemingway uses repetition a lot, which stresses the boredom of this empty world. However, it also foregrounds certain words that Hemingway wants to emphasize for his personal use, for example in these sentences: " He knew these two and thought them a handsome young couple. He had seen many handsome young couples break up and new couples form that were never so handsome long." In this case, the adjective "handsome" is repeated three times, this brings out the key theme of this story, that though on the surface these people lead attractive and bright lives, they actually live hollow and meaningless lives. Also he wants to foreground the importance of this word on the surface for the reader, while revealing the actual hollow meaning. So, we can understand that Hemingway's minimalistic style is always showed In his stories, and the style used in a Sea Change is similar to Hills Like White Elephants. To conclude, Hemingway, as in "Hills Like White Elephants," brings out the main theme in this story, which is the condition of the "lost generation," however, in this story the issue of fidelity and infidelity is brought out, as both man and woman have affairs. The setting of this story, the end of summer, and beginning of autumn also brings out this fact of the end of the relationship, since there is another season ending. So it foregrounds what is coming ahead. ...read more.