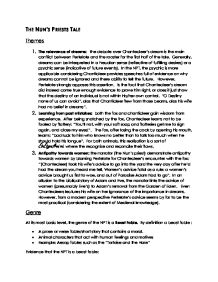 THE NUN'S PRIESTS TALE Themes 1. The relevance of dreams: the debate over Chantecleer's dream is the main conflict between Pertelote and the rooster for the first half of the tale. Generally, dreams can be interpreted in a Freudian sense (reflective of fulfilling desires) or a psychic sense (indicative of future events). In the NPT, the psychic is more applicable considering Chanticleer provides speeches full of evidence on why dreams cannot be ignored and there ability to tell the future. However, Pertelote strongly opposes this assertion. Is the fact that Chantecleer's dream did indeed come true enough evidence to prove him right, or does it just show that the destiny of an individual is not within his/her own control. "O Destiny none of us can avoid", alas that Chanticleer flew from those beams, alas his wife had no belief in dreams". 2. Learning from past mistakes: both the fox and chanticleer gain wisdom from experience. After being snatched by the fox, Chantecleer learns not to be fooled by flattery: "You'll not, with your soft soap and flatteries get me to sign again, and close my eyes!". ...read more.

Genre At its most basic level, the genre of the NPT is a Beast Fable. By definition a beast fable : * A prose or verse fable/short story that contains a moral. * Animal characters that act with human feelings and motives * Example: Aesop fables such as the "Tortoise and the Hare" Evidence that the NPT is a beast fable: * Centred on three characters who are all animals - Chantecleer (Rooster), Pertelote (Hen) and a Fox. * The animals' characters show human attributes: o Chantecleer: proud, cocky, vain, scholarly (able to quote philosophers and classical literature), in a husband-wife marriage more than a rooster-hen relationship, na�ve o Pertelote: critical, dominating, ignorant o Fox: sly, cunning * The tale allows insight on human action. The fox's flattery exploited Chantecleer's vainity, thus leading to the basic moral: "be wary of flattery". * A beast fable is always critical of humans, usually focussing on one or two of our flaws/initiations. * Fables, being didactic and instructive also often have a religious purpose as well, with the NPT exhibiting the power of the will of God. ...read more.

Note the head to toe description. * The hero has 'a love of his life' (Pertelote) * Chantecleer is first notified of an impending trial/danger in a dream. This is similar to other epics like The Aenied. * Parody of the expected 'insurmountable trials' the hero faces occurs when Chantecleer is easily tricked by the fox. * The hero only succeeds in the end because he tricks the fox in return. Contemporary example of a Mock-Heroic: The Broadway musical Spamalot, based on Monty Python and the Holy Grail. Mock-Tragedy: The Nun's Priests Tale contains nearly all the elements of the Aristotelian definition of tradegy: * Chantecleer's hammartia (tragic flaw) is his hubris (pride, in this case vanity). * The peripeteia (reversal of fortunes) occurs when Chantecleer is snatched by the fox. * The anagnorisis (realisation of the flaw) occurs when Chantecleer escape from the fox and climbs up a tree where he refuses to be fooled by flattery again. ...read more.