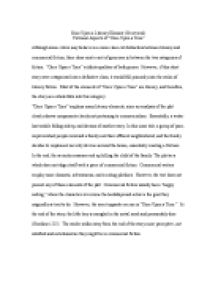 Analysis of Nadine Gordimer's Once Upon a Time.

﻿Once Upon a Literary Element (Or several): Fictional Aspects of ?Once Upon a Time? Although some critics may believe in a more clear-cut distinction between literary and commercial fiction, there does exist a sort of gray area in between the two categories of fiction. ?Once Upon a Time? exhibits qualities of both genres. However, if this short story were categorized into a definitive class, it would fall primarily into the realm of literary fiction. Most of the elements of ?Once Upon a Time? are literary, and therefore, the story as a whole falls into this category. ?Once Upon a Time? employs many literary elements, since an analysis of the plot clearly shows components clearly not pertaining to commercialism. Essentially, a writer has trouble falling asleep, and dreams of another story. In this inner tale, a group of poor, impoverished people surround a family and their affluent neighborhood, and the family decides to implement security devices around the house, essentially creating a fortress. ...read more.

Literary stories have more complex themes to them as well. As for “Once Upon a Time,” the text highlights the need for balance between security and freedom. The elaborate defense systems the family employs are extremely extensive and unnecessary, with numerous defensive gadgets being utilized (Gordimer 222). When the child is caught in the wire, the fallibility of the family’s paranoia is revealed. Total safety and liberty cannot coexist; the two aspects of life must be balanced. People cannot attain total security while maintaining freedom, and vice versa. Literary fiction usually utilizes these layered stories, whereas commercial fiction simply has “morals” or cliché ideas behind them. The beginning of the stories utilizes the first-person perspective, and then the majority of the piece is told through a limited third-person narrator. This perspective distances the reader from the story even further; the narrator is very blunt and bland. Without delving into the thoughts and minds of the characters, the reader is forced to make his or her own conclusions regarding the characterization of the family in the story. ...read more.

The irony of all the safety precautions presents itself in the final moments of the story. The young boy is caught in the tangling mess of security, and the text suggests the boy is dead. Throughout the story, the family attempts to protect themselves with physical devices, but in the end, it?s the parents? own paranoia and securities that cost them their son. Indeed, ?Once Upon a Time? possesses a few elements which could be construed as commercial fiction. However, the majority of the story presents traits which are ingredients for a piece of literary fiction. The plot presents a rather unhappy ending which causes the reader to reflect rather than relax. Although commercial fiction utilizes morals, this story reveals the complexities between security and freedom. Characterization essentially is nonexistent; readers are forced to create their own perceptions and images of the family and their personalities. The point of view and use of irony also contribute to the story?s literariness. ?Once Upon a Time? may seem like a simple bedtime story created by a man?s dream, but on the contrary, it presents a unique fictional story containing many different complex literary elements. ...read more.