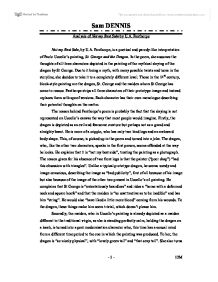 Analysis of Not my Best Side by U.A. Fanthorpe

Analysis of Not my Best Side by U.A. Fanthorpe Not my Best Side, by U.A. Fanthorpe, is a poetical and parody-like interpretation of Paolo Uccello's painting, St. George and the Dragon. In the poem, she assumes the thoughts of all three characters depicted in the painting of the mythical slaying of the dragon by St George. Due to it being a myth, with many possible twists and turns in the storyline, she decides to take it to a completely different level. Those in the 14th century, block-style painting are the dragon, St. George and the maiden whom St George has come to rescue. Fanthorpe strips all three characters of their prototype image and instead replaces them with spoof versions. Each character has their own monologue describing their potential thoughts on the matter. The reason behind Fanthorpe's poem is probably the fact that the slaying is not represented on Uccello's canvas the way that most people would imagine. ...read more.

To her, the dragon is "so nicely physical", with "lovely green tail" and "that sexy tail". She also turns the representation of being eaten into a sexual desire and talks of how she could see all of the dragon's equipment. As for St George, or "this boy" (yet again referring to the saint's beardless and baby-like face) to the maiden, she "didn't much fancy him" because of all his concealing armour that could be hiding "acne, blackheads or even bad breath" and because of his "really dangerous horse". Yet again, this is a deep contrast to the prototype legend where the maid should instantly fall in love with St George and then run, screaming, from the dragon. At the end of the maiden's monologue, Fanthorpe decides to use one last line of utter femininity on behalf of the victim by saying "And a girl's got to think of her future". ...read more.

The enjambments are also used in a very good way to reflect the casual and informal speech-like aspect to the poem. For example "So when this boy turned up, wearing machinery, On a really dangerous horse, to be honest..." This enjambment could be used to portray a pause in a sentence, an afterthought or even and exaggeration in speech. Many more such enjambments are used throughout the text. Much of the vocabulary in the text is used to reflect the carelessness and modernity of the characters. Such words and expressions are "as you can see", "so" (used many times), "well" ("Well you could see all his equipment"), "I mean", "that", "this", "sexy", "I didn't much fancy him" etc. In conclusion, I thought that the poem was very clever and amusing in the way that it creates a parody out of not only a myth, but also a painting illustrating that myth. The characters are careless but also fearless and everything exemplified in Fanthorpe's poem is in contrast to the prototype legend. ?? ?? ?? ?? Sam DENNIS - 1 - 12M ...read more.