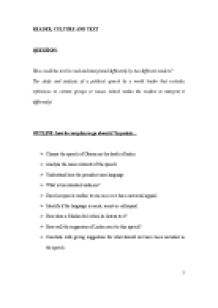 Analysis of President Obama's speech on the death of Osama Bin Laden.

﻿READER, CULTURE AND TEXT QUESTION: How could the text be read and interpreted differently by two different readers? The study and analysis of a political speech by a world leader that excludes references to certain groups or issues (which makes the readers to interpret it differently) OUTLINE: how do you plan to go about it? In points? * Choose the speech of Obama on the death of laden. * Analyze the main contents of the speech. * Understand how the president uses language. * What is his intended audience? * Does his speech confine to one race or it has a universal appeal. * Identify if the language is racist, sexist or colloquial. * How does a Muslim feel when he listens to it? * How will the supporters of Laden react to this speech? * Conclude with giving suggestion for what should not have been included in the speech. ________________ The President calls bin Laden ?a terrorist?, and draws a powerful visual image to create an adverse impression of Laden by employing antithesis ?bright September day was darkened by the worst attack on the American people? and that this atrocity is ?seared into our national memory.? What does he wish to allude by the personal pronoun ?our?? This use alienates the non-American audiences from him, as bin Laden has always been a revolutionary leader in the eyes of the Islamic world. ...read more.

It seems very easy for the president to assert that the American soldiers took custody of the body of Laden, but he never takes pain to disclose what they did to the body of the martyr. How and where was the body disposed of? Then he arraigns ?Bin Laden was not a Muslim leader; he was a mass murderer of Muslims.? Can Obama explain why this ?mass murderer of Muslims? had to launch a painstaking operation for the demolition of the twin towers and the Pentagon? If he were a slaughterer of the Muslims he would not need to highjack the American planes and dash them into the pride of America. The President wants this third degree murder of an old man living in the company of his wives and children in isolation to ?be welcomed by all who believe in peace and human dignity.? But is the act of attacking and killing Laden and his family an act of ethics and dignity? He talks of the innocent Americans that died in the 9/11 attacks but he shirks describing the fate of Laden?s innocent wives and children. Why was Laden not arrested and brought to the court of justice when he had been so easily apprehended in Abbottabad? In order to soothe the angry and hurt sentiments of the Muslim world, the president says that his ?war is not against Islam? but can he explain why the drones were used as a salient feature of his foreign policy in Muslim countries only. ...read more.

He talks of God, but he does not give any reasons for throwing the body of a man, however dreadful a terrorist he may have been, in the ocean. Is it religious to deprive a terrorist of his last ceremonial rites? Even a dead terrorist should not be subjected to sink in the ocean with a ?bubbling groan, without a grave, unknelled, uncoffined, and unknown." Obama is a very cunning orator, and he uses his words flamboyantly to emotionally incline his audience to his side of the story. In order that the Muslims do not take a grudge against his anti Islamic feelings he repeatedly alludes to 9/11 mishap. But he cannot be successful in his attempts as his words are a part and parcel of his attitude to the Muslim world, where every resident with a beard or a turban is either a terrorist or a Taliban. And no doubt even after two years of his murder the death of Laden is a polemic topic that demands further explanations. In the words of Peter Bergen, CNN's national security analyst, ?The U.S. forces may have killed the man, but they did not kill his ideology. Al Qaeda has now morphed into a ?loose jihadist ideological movement? that spawned the Boston marathon bombing. The president must remember ?spite is not best repaid with spite always.? And as the President of the USA it is his foremost duty to deliver a speech, which receives a warm welcome from people from all walks of life, irrespective of caste, creed and cult. ...read more.