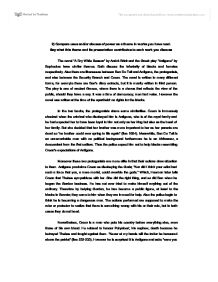 2) Compare uses and/or abuses of power as a theme in works you have read. Say what this theme and its presentation contributes to each work you discuss The novel "A Dry White Season" by Andr� Brink and the Greek play "Antigone" by Sophocles have similar themes. Both discuss the inferiority of blacks and females respectively. Also there are likenesses between Ben Du Toit and Antigone, the protagonists, and also between the Security Branch and Creon. The novel is written in many different forms, for example there are Ben's diary extracts, but it is mostly written in third person. The play is one of ancient Greece, where there is a chorus that reflects the view of the public, should they have a say. It was a time of democracy; men had votes. However the novel was written at the time of the apartheid: no rights for the blacks. In the two books, the protagonists share some similarities. Creon is immensely shocked when the criminal who disobeyed him is Antigone, who is of the royal family and he had expected her to have been loyal to him not only as her king but also as the head of her family. ...read more.

But because Antigone is a reckless child and he ends up losing everything dear to him which allows the reader to be able to sympathise with Creon. However, the narrator of the novel does not present the Security Branch in a favourable light. They are a part of the police who are working against the communist guerrillas. Most of the members of these guerrillas are the blacks fighting for their equality. Nevertheless, the Security Branch believes that the government is doing many things for the blacks, thus disappointed in them for fighting against the government. "Look at everything the Government's doing for them and all they can think of in return is to burn down and destroy whatever they can lay their hands on" (p. 62). Furthermore they seem to believe that they are actually protecting the citizens of chaos and destruction. "People don't seem to realize we're in the middle of a war already. [...] Take it from me, Mr. Du Toit: if we were to lay off for one week this country would be right down the drain." (p. 207) Despite their good intentions, there are reasons to dislike the Branch and Creon. ...read more.

Whilst there was a balance between Creon and Antigone, the Security Branch is indicated as the ones that are wrong in their philosophy. Modern fundamentals include democracy, a right given to all, no matter their race. Therefore it is natural for the reader to feel contempt towards the police. However, Antigone is an insolent teenager who does not think of the consequences and seems to want to glorify herself. "Give me glory! What more glory could I win than to give my own brother decent burial?" (line 561-562). Nevertheless Creon is a sexist who ignores the Gods will. Thus the Greek audience would have debated the themes that still apply today. In conclusion, the time and setting in the two works are important factors when their theme is involved. In ancient Greece there was a form of primitive democracy however the right was not given to all, no women could vote. Even since then men thought themselves superior. "Antigone" is one of the first literary works that deal with feminism. Antigone does what she wishes and will not be put down by a man. During the apartheid, there were many inequalities which "A Dry White Season" illustrates. People would like to think that these problems have faded in the modern day era, however some factors that can be related to still remain a problem. ?? ?? ?? ?? ...read more.