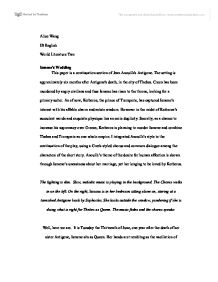 Alice Wang IB English World Literature Two Ismene's Wedding This paper is a continuation section of Jean Anouilh's Antigone. The setting is approximately six months after Antigone's death, in the city of Thebes. Creon has been murdered by angry civilians and thus Ismene has risen to the throne, looking for a primary suitor. As of now, Kerberos, the prince of Tromperie, has captured Ismene's interest with his affable charm and astute wisdom. However in the midst of Kerberos's succulent words and exquisite physique lies an eerie duplicity. Secretly, as a chance to increase his supremacy over Greece, Kerberos is planning to murder Ismene and combine Thebes and Tromperie as one whole empire. I integrated Anouilh's style to the continuation of the play, using a Greek styled chorus and common dialogue among the characters of the short story. Anouilh's theme of the desire for human affection is shown through Ismene's uneasiness about her marriage, yet her longing to be loved by Kerberos. The lighting is dim. Slow, melodic music is playing in the background. The Chorus walks in on the left. ...read more.

I do not know why my people do not trust you. KERBEROS: The guards are fine now, aren't they? Your people are just probably scared of a new throne. ISMENE: Or are they? What about those mysterious killings just after you proposed to me, Kerberos? So far, ten scribes, twenty guards, and two cooks have been poisoned. I'm beginning to doubt if this marriage is going to work. We love each other, right? KERBEROS [with slight hesitation]: There is no question how much you mean to me, Ismene. You are the wind beneath my wings, my guiding light, my everything. Kerberos holds Ismene tightly, his lips close to hers. Ismene gently touches Kerberos's face, but Kerberos backs away. KERBEROS [smiles]: You need your rest. Until tomorrow, my love. ISMENE [sheepishly]: Until tomorrow. The stage closes. In the dark dungeon of Thebes lies a man with a hooded cape and Kerberos. The marble sidewalks laid in oblivion to the iniquity of the night. MAN [annoyingly]: What now, Kerberos? KERBEROS: I need ten more. I'll give you one hundred pounds and you must swear to keep your mouth shut. ...read more.

Voice 2: I hope Ismene comes soon. This wedding is starting to look desolate. KERBEROS[turning to the voices]: Shut up. I do not have time for your t�te-�-t�te nonsense. Your disrespect is impervious. It is not your wedding day. Voice 5 [mumbling]: Nor is it yours. Silence stumbled upon the voices as Ismene opens the white doors. Her face looks paler than the depths of her pallid, white dress. However, her eyes shimmered as she say Kerberos. Ismene walks down the aisle as eyes of despondency lay hidden in the audiences' eyes. Suddenly, she falls dramatically down, her legs feebly trying to get up. Kerberos rushes to her side. KERBEROS [cautious]: Are you alright Ismene? ISMENE [weakly]: I feel so....enervated. Voice 1: Maybe we should postpone the wedding. Our highness looks too anemic. Voice 2 [agreeing]: Let's put her to rest KERBEROS [flustered]: Silence! Ismene needs to marry me today. It is my...her special day! ISMENE [faintly]: Kerberos..... Ismene grabs Kerberos' hand as she pulls herself up and continues to walk down the aisle. The intonation of disapproval surrounded the church. After they exchanged vows, Ismene suddenly falls down on the white marble floor while Kerberos disappears into the distance. Kerberos' menacingly grins as he holds a bottle of black potion beneath his fingertips. ...read more.