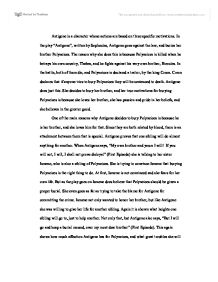 Antigone is a character whose actions are based on three specific motivations. In the play "Antigone", written by Sophocles, Antigone goes against the law, and buries her brother Polyneices. The reason why she does this is because Polyneices is killed when he betrays his own country, Thebes, and he fights against his very own brother, Eteocles. In the battle, both of them die, and Polyneices is declared a traitor, by the king Creon. Creon declares that if anyone tries to bury Polyneices they will be sentenced to death. Antigone does just this. She decides to bury her brother, and her true motivations for burying Polyneices is because she loves her brother, she has passion and pride in her beliefs, and she believes in the greater good. One of the main reasons why Antigone decides to bury Polyneices is because he is her brother, and she loves him for that. Since they are both related by blood, there is an attachment between them that is special. Antigone proves that one sibling will do almost anything for another. ...read more.

But above her love for her brother, Antigone's other motivation for burying Polyneices is that she has passion and pride in her beliefs. Antigone herself seems to be a religious person, and she holds true to her beliefs all the time. After committing the crime, Antigone says to Creon "Far longer is there need I satisfy those nether powers, than powers on earth." (Second Episode) This shows that she wants to follow the laws set by her religion, before following the laws set by her country. She believes that the laws made by her gods, overpower the laws made by man. Since she had such strong beliefs, she was able to go through with all the things she did, such as burying her own brother. Not only that, but her beliefs gave her the strength to accept the consequences she would face for her actions. She was so proud, and passionate about her beliefs, that she was willing to risk her life only so she could follow her beliefs. In the end, her beliefs gives her the strength and courage to accept her sentence of death. ...read more.

But as the story went on she realizes it was the right thing to do. The fact that she knows that she did the right thing gave her the strength to accept her consequence; and it contributed to her killing herself, instead of being hanged in public. Since she believed in the greater good, she based her decisions on her beliefs, before her love for her brother. This just shows that Antigone would have always done the right thing, irrespective of whether someone is related to her or not. In the play "Antigone", written by Sophocles, the main character Antigone has the motivation to bury her brother. Antigone did what she did because she believes in the greater good. She buries Polyneices because he was her brother. But what made her go through with it were her strong beliefs. First of all, she loved her brother, and it seems as though she would do anything for another sibling, Secondly, she has great pride and passion in her beliefs that gives her the strength to go through with her actions. Lastly, she believed in the greater good, which gives her the belief that she was doing the right thing. All these things helped motivate Antigone to go and bury Polyneices. ...read more.