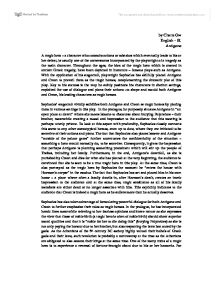 by Charis Ow English - SL Antigone A tragic hero - a character who commits actions or mistakes which eventually leads to his or her defeat, is usually one of the cornerstones incorporated by the playwright of a tragedy as the main character. Throughout the ages, the idea of the tragic hero which is created in ancient Greek tragedy, have been depicted in literature - famous plays such as Antigone. With the application of his stagecraft, playwright Sophocles has skilfully placed Antigone and Creon to prevail them as the tragic heroes, complementing the dramatic plot of this play. Key to his success is the way he subtly positions his characters in distinct settings, exploited the use of dialogue and plans their actions -to shape and mould both Antigone and Creon, his leading characters as tragic heroes. Sophocles' stagecraft vividly solidifies both Antigone and Creon as tragic heroes by placing them in various settings in this play. In the prologue, he purposely situates Antigone in "an open place at dawn" where she meets Ismene to discourse about burying Polyneices - their brother, meanwhile creating a mood and impression to the audience that this meeting is perhaps utterly private. ...read more.

One of the many traits of a tragic hero is to experience a reversal of fortune brought about due to his or her hamartia. For instance, Creon is also depicted as a tragic hero by Sophocles through the means of his heroic speeches about loving his country more than a loved one and of never staying silent if there are threats to his city's safety, which arouse fear and empathy of the people in Thebes in the first episode in Antigone. This perhaps implies to the audience that he is a powerful, an intelligent and a devoted ruler - another quality of a hero. However, despite all that heroic utterance that suggests his greatness and authority, in the end, he suffers when his son, Haemon and his wife, Eurydice kills themselves - which further underlines Creon as a tragic hero in the play. How Sophocles creates and plans the actions of both Antigone and Creon throughout the play also contributes to their roles as tragic heroes. In the second episode, Antigone's operation of reburying Polyneices heightens her as a tragic heroine when she is caught by the sentries for disobeying the Creon's commands - she does this twice, indicates her to be fearless and that she also appears to be a young girl who rises up alone against state power. ...read more.

Sophocles explicitly portrays both Antigone and Creon as tragic heroes in their own very different ways. However, when these two characters are compared meticulously, Antigone - in some respects -does not fulfil the Athenian's idea of a tragic hero of experiencing the realisation of the error (anagnorisis), which results in catharsis or epiphany - unlike Creon who changes his heart even when his paranoic suspicion of corruption leads him to unreasonable accusations and anger. Moreover, she does not seem to be an intelligent or a bright person as she is portrayed to be wild and reckless - in the eyes of the audience -for acting foolishly and carelessly in handling situations and compromising her point of views - not a common trait of a tragic hero at all. Sophocles goal of creating a tragic hero in his play is to show his audience a character which they could relate to as an imperfect persona meanwhile arousing solemn emotions for that character. On top of that, it also allows him to incorporate moral lessons and also realistic life issues in his play : each individual will face consequences when bad decisions are made, when advices from the wise ones are not disregarded and committing an act before apprehensive considerations. (1,281 words) ...read more.