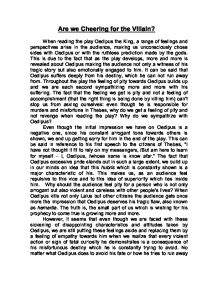 Are we Cheering for the Villain?

Are we Cheering for the Villain? When reading the play Oedipus the King, a range of feelings and perspectives arise in the audience, making us unconsciously chose sides with Oedipus or with the ruthless prediction made by the gods. This is due to the fact that as the play develops, more and more is revealed about Oedipus making the audience not only a witness of his tragic story but also emotionally engaged to him. It can be said that Oedipus suffers deeply from his destiny, which he can not run away from. Throughout the play the feeling of pity towards Oedipus builds up and we are each second sympathizing more and more with his suffering. The fact that the feeling we get is pity and not a feeling of accomplishment (that the right thing is being done by killing him) ...read more.

This makes us, as an audience feel repulsive to this vice and to this idea of superiority which lies inside him. Why should the audience feel pity for a person who is not only arrogant but also violent and careless with other people's lives? When Oedipus kills not only Laius but other citizens the audience gets once more the impression that Oedipus deserves his tragic flaw, also known as hamartia. The truth is, the small part of us which is wishing for his prophecy to come true is growing more and more. However, it seems that even though we are faced with these sickening of disappointing characteristics and attitudes taken by Oedipus, we are still putting these feelings aside and replacing them by a feeling of empathy towards him when we realize that every violent action or sign of fatal curiosity he demonstrates is a consequence of his misfortunous destiny which he is constantly trying to avoid. ...read more.

Why was I to see, when sight could show me nothing sweet." The answer to the initial question of why do we feel pity and empathy towards a man that has committed consecutive crimes (as murders and incest) can be answered after reflecting on the fact that the actions taken by Oedipus were a consequence of the prophecy created by the gods and not due to acting under a influence of a purely evil mind. The fact that he was not responsible for his tragic fate, on the contrary, he tried to avoid it as much as possible, proves that even though Oedipus is not that ordinary hero we originally know from novels or movies, due to his virtuous intentions we not only can relate to him, but also feel pity and compassion for him. ?? ?? ?? ?? ...read more.