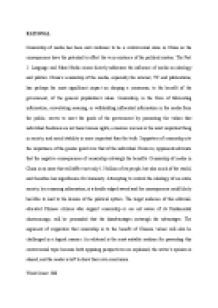 Arguing in favour of censorship in China.

﻿RATIONAL Censorship of media has been and continues to be a controversial issue in China as the consequences have the potential to affect the very existence of the political system. The Part 2: Language and Mass Media course directly addresses the influence of media on ideology and politics. China?s censorship of the media, especially the internet, TV and publications, has perhaps the most significant impact on shaping a consensus, to the benefit of the government, of the general population?s ideas. Censorship, in the form of fabricating information, convoluting meaning, or withholding influential information in the media from the public, serves to meet the goals of the government by promoting the values that individual freedoms are not basic human rights, economic success is the most important thing in society, and social stability is more important than the truth. Supporters of censorship cite the importance of the greater good over that of the individual. However, opponents advocate that the negative consequences of censorship outweigh the benefits. Censorship of media in China is an issue that will affect not only 1.3 billion of its people, but also much of the world, and therefore has significance for humanity. Attempting to control the ideology of an entire society, by censoring information, is a double edged sword and the consequences could likely backfire to lead to the demise of the political system. ...read more.

(PBS). This definition doesn?t seem to portray censorship in a good term. However, just as with every controversial issue, there are two sides, each with their perspective and supporting evidences. Regardless of moral or ethical significance of censorship, only the effects are discussed. In the society with censorship negative information does not spread, or the story is shed in a different light, then the status quo remains. Often the status quo is better than the alternative. After all, censoring information can be a very effective tool. According to author James Fallows, the Chinese government's censorship polices are effective in that most ordinary citizens will not make the effort to circumvent it and usually believe what is in the media more often than not (Stay). Since censorship is the means by which the government retains the values of the Chinese people, it is easy to justify. Let's put it into perspective by illustrating a very possible scenario in modern day China. A large Chinese bank unexpectedly goes out of service, even surprising the government because bank executives skewed the internal audits. Word gets out and bank customers rush to withdraw their savings. The Chinese government quietly injects money into the bank, which allows the customers to withdraw the money, and prohibits any media from running the story. Such decisive action prevents bank customers from other banks, who also fear that this could be a chain reaction similar to the financial crisis in the West not long ago, from withdrawing all of their savings and causing a banking crisis. ...read more.

A lack of censorship also allows for all sides of a story to be heard, in effect creating a desensitized public that is more aware and informed to make decisions. Although a more messy, sometimes less effective process, open access to information in a society yields greater long term benefits than censorship without the risks that come with the lack of self-correcting mechanisms. Censorship is nothing new, having been practiced by those in power since the beginning of history. The control of information can be the greatest force known to man. The problem is that it never works for long. It is easy to see the problems that come with, albeit extreme examples of censorship, book burning and the imprisonment of activists - dumb people cannot lead the next generation and martyrs cause revolutions. Censorship, as practiced by the Chinese government, is highly unlikely to prove a successful strategy - unless they defy the history of civilization, which is highly unlikely. Word:1016 Citation ?China?s Internet Censorship Is Effective.? Censorship. Ed. Byron L. Stay. San Diego: Greenhaven Press, 2010. Opposing Viewpoints. Gale Opposing Viewpoints In Context. Web. 18 Jan. 2012. "Culture Shock: Who Decides? How and Why?: Definitions of Censorship." PBS: Public Broadcasting Service. PBS. Web. 18 Jan. 2012. <http://www.pbs.org/wgbh/cultureshock/whodecides/definitions.html>. McKellogg, JulieAnn. "Freedom House: Internet Censorship Circumvention Tools Effective, Lack Security." News | English. Voice of America, 15 Apr. 2011. Web. 18 Jan. 2012. <http://www.voanews.com/english/news/Freedom-House-Internet-Censorship-Circumvention-Tools-Effective-Lack-Security-119738134.html>. ?What Is Censorship?? Global Internet Liberty Campaign Home Page. Web. 16 Sept. 2010. <http://gilc.org/speech/osistudy/censorship/index.html>. ...read more.