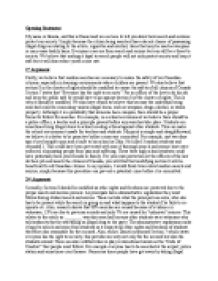 Arguing in favour of more searches of individuals by the Canadian police.

﻿Opening Statement My name is Hamza, and this is Daniel and we are here to tell you about how search and seizures protect our society. Simply because the citizen being searched has a decent chance of possessing illegal drugs as relating to the article, cigarettes and alcohol, items that may be used as weapons or may cause bodily harm. Everyone is secure from search and seizure but can still be a threat to society. We believe that making it legal to search people will not only protect society and keep it safe but it will also reduce youth crime rate. 1st Argument Firstly, we believe that random searches are necessary to ensure the safety of our Canadian citizens; especially in learning environments where children are present. We also believe that section 8 in the charter of rights should be modified to ensure the safety of all citizens of Canada. Section 7 states that ?Everyone has the right to security.? For an officer of the law to do his job and keep the public safe he would have to go against section 8 of the charter of rights. This is why it should be modified. ...read more.

Research indicated, that minorities are being searched for no reason the most, especially Africans and Hispanics. If search and seizure was a legal and common thing, it would stop discrimination as everyone is getting searched on a regular basis and not just minorities also the increase in teen illicit substance abuse would go down. 47,000 deaths are linked to substance abuse annually, 23% of Ontario students reported they were offered, sold or given a drug at school in the last year that?s about 219,000 students according to the Centre for Addiction and Mental Health . Substance abuse has also cost our health care system $8 billion according to the Canadian Centre of Substance Abuse. Therefore, having search and seizure legal and more regular will provide citizens with a high level of security (Section 7), save our government lots of money which could be used for other outstanding factors, put a stop to discrimination(Section 27) and also save innocent lives. Closing Statement For every crime, there is a way to solve it and a way to prevent it. Our main purpose is to prevent it by ensuring that all citizens of Canada are safe. ...read more.

Weapons or items that may be used as weapons. Including all forms of firearms and knives. iii. Electronic and multimedia devices iv. Written material including books and journals v. Stolen property - Survey from schools in Canada revealed, 80% searches due to witnesses or evidence, 13% due to previous records of stealing or drug/weapon abuse and only 7% were ?unknown? causes. - In North America, most unreasonable searches were mainly on minorities. Africans and Hispanic background being the highest. 1. 47,000 Canadian deaths are linked to substance abuse annually. Health Officer's Council of British Columbia 2. 23% of Ontario students report that they were offered, sold, or given a drug at school in the last year. That's about 219,000 students. 3. 42% of Ontario students surveyed have used an illicit substance in the last year. 4. 83% of Ontario students in grade 12 drink alcohol. 49% of gr. 12 students admit to binge drinking. 5. The top four substances used by Ontario students: 58% alcohol; Cannabis (marijuana) 25%; Non-prescribed use of prescription pain relievers such as codeine, Percocet, Percodan, Demerol, or Tylenol #3, 17%; Tobacco 11.7%. Centre for Addiction and Mental Health 1. Substance abuse has cost our health care system $8 billion. Canadian Centre on Substance Abuse 2. Female addicts are 54% more likely to die prematurely because of their drug use. University of Toronto ...read more.