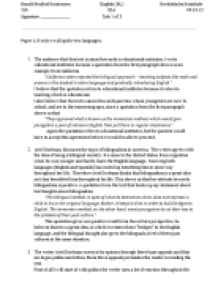 Ariel Dorfman. discusses the topic of bilingualism in America. The writer agrees with the idea of being a bilingual country.

﻿Harald Hvalkof Kristensen English (HL) Herlufsholm Kostskole 2.ib ELA 09.10.12 Signature: __________________ Side of ________________ Paper 1. If only we all spoke two languages. 1. The audience that this text is aimed towards is educational institutes. I write educational institutes because a quotation from the first paragraph shows us an example from California ?California voters rejected the bilingual approach -- teaching subjects like math and science in the student's native language and gradually introducing English.? I believe that the quotation refers to educational institutes because it refers to teaching which is educational. I also believe that the text is aimed towards parents, whom youngsters are new to school, and are in the immersing ages, since a quotation from the first paragraph shows us that ?They approved what is known as the immersion method, which would give youngsters a year of intensive English, then put them in regular classrooms.? Again the quotation refers to educational institutes, but the parents would have to accept this agreement before it would be able to proceed. 1. Ariel Dorfman. discusses the topic of bilingualism in America. ...read more.

First of all I will start of with pathos the writer uses a lot of emotion throughout the text when she explains her life. Ariel Dorfman makes the reader feel his emotion when reading the text about how he became bilingual. For example the part of the text when he uses his personal life to capture the minds of the reader. ?I first suffered the immersion method in 1945 when I was 2 1/2 years old. My family had recently moved to New York from my native Argentina, and when I caught pneumonia, I was interned in the isolation ward of a Manhattan hospital. I emerged three weeks later, in shock from having the doctors and nurses speak to me only in English, and didn't utter another word in Spanish for 10 years.? This quotation from the text shows us how he uses her personal life in order to capture the emotion from the reader. This makes the reader feel sympathy for the writer and therefore read on. Ariel Dorfman uses ethos in help to persuade readers into believing what she believes. ...read more.

children are better off, and less scarred, by holding on to their first languages as they learn a second one,? This quotation is logical in the sense that of coarse if you are known to more than one language then you are able to realize the different cultures in which your languages are specified. By this then you are far better of than just knowing one language, when you can learn two. 1. The writer is very effective in persuading his audience to realize that bilingualism is a far better solution to the world rather than being monolingual, in the sense that you are more open to other cultures and exposed to more than one culture. Ariel Dorfman uses a number of persuasive techniques in order to capture and fortify people?s attention. As the writer uses the three basic appeals pathos, ethos and logos which are all three effective in persuading people to ?join the same boat, as he is on?. He uses formal dictions to gather the reader?s emphasis. The text is well laid out and structured to perfection. To conclude everything, as a bilingual myself I thought that this idea Ariel Dorfman perseveres is great and understandable. ...read more.