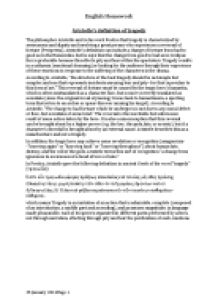 ﻿English Homework Aristotle?s definition of tragedy The philosopher Aristotle said in his work Poetics that tragedy is characterized by seriousness and dignity and involving a great person who experiences a reversal of fortune (Peripeteia). Aristotle's definition can include a change of fortune from bad to good as in the Eumenides, but he says that the change from good to bad as in Oedipus Rex is preferable because this effects pity and fear within the spectators. Tragedy results in a catharsis (emotional cleansing) ...read more.

(since the original Greek etymology traces back to hamartanein, a sporting term that refers to an archer or spear-thrower missing his target). According to Aristotle, "The change to bad fortune which he undergoes is not due to any moral defect or flaw, but a mistake of some kind." The reversal is the inevitable but unforeseen result of some action taken by the hero. It is also a misconception that this reversal can be brought about by a higher power (e.g. ...read more.