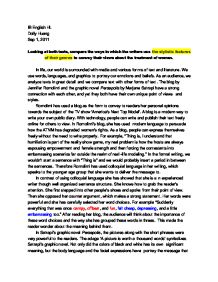 As an audience, we analyze texts in great detail and we compare text with other forms of text. The blog by Jennifer Romolimi and the graphic novel Persepolis by Marjane Satrapi have a strong connection with each other, and yet they both have their own uni

IB English HL Dolly Huang Sep 1, 2011 Looking at both texts, compare the ways in which the writers use the stylistic features of their genres to convey their views about the treatment of women. In life, our world is surrounded with media and various forms of text and literature. We use words, languages, and graphics to portray our emotions and beliefs. As an audience, we analyze texts in great detail and we compare text with other forms of text. The blog by Jennifer Romolimi and the graphic novel Persepolis by Marjane Satrapi have a strong connection with each other, and yet they both have their own unique point of views and styles. ...read more.

In the formal writing, we wouldn't start a sentence with "Thing is" and we would probably insert a period in between the sentences. Therefore Romolimi has used colloquial language in her writing, which speaks to the younger age group that she wants to deliver the message to. In contrast of using colloquial language she has showed that she is an experienced writer though well organized sentence structure. She knows how to grab the reader's attention. She first stepped into other people's shoes and spoke from their point of view. Then she opposed her counter argument, which makes a strong statement. Her words were powerful and she has carefully selected her word choices. ...read more.

It also refers that the Islamic revolution was an unfavorable event. Especially women's rights were degraded throughout the revolution. Satrapi has used language and imagery to emphasis on the influence of veil. If we look closely, we'll be able to realize that the girls who are wearing the veil has lack of facial emotion, which refers to the lack of individuality and identity. Compare the title image and the first two frames, we can see the difference that the proper way of wearing a veil is to cover the entire head including hair. The girls in the first two frames have hair sticking of the veil, which gives the sense that they are on the verge of breaking the veil rule. Later Based on her personal experience, she has brought the audience into her childhood through her graphic novel. ?? ?? ?? ?? ...read more.