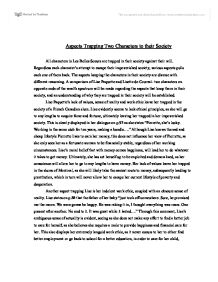 Aspects Trapping Two Characters to their Society All characters in Les Belles Soeurs are trapped in their society against their will. Regardless each character's attempt to escape their impoverished society, various aspects pulls each one of them back. The aspects keeping the characters in their society are diverse with different reasoning. A comparison of Lise Paquette and Lisette de Courval- two characters on opposite ends of the wealth spectrum will be made regarding the aspects that keep them in their society, and an understanding of why they are trapped in their society will be established. Lise Paquette's lack of values, sense of reality and work ethic leave her trapped in the society of a French Canadian slum. Lise evidently seems to lack ethical principles, as she will go to any lengths to acquire fame and fortune, ultimately leaving her trapped in her impoverished society. This is clearly displayed in her dialogue on p.93 as she states "Pierrette, she's lucky. Working in the same club for ten years, making a bundle...." ...read more.

Through Lise's belief that she can only be happy and financially stable with a male partner, while not having to work herself, she is restraining herself from starting a life of independence away from the slums of Montreal. Through constantly leaning on others to support her, she is limiting herself to very few opportunities in life, subsequently leaving her in to live in the situation of poverty and despair for her entire life. Despite Lise wanting "a proper life... to make something of myself... to be somebody" (p.88), her utter lack of work ethic restraints her to very few options as she simply expects life to come together itself and fall on her lap. Lise's life is subsequently a result of her poor decisions and morals, and therefore her own fault in which she is left to live in the Montreal slum. This comparison can be made to another character as well, who although is at the different end of the wealth spectrum, ultimately is left to live in the slum as well as a result of her own poor decisions. ...read more.

Although Lisette has the financial capabilities of escaping the impecunious slum, it is her companionship with the women, which she has difficulty breaking off, that keeps her trapped and unable to break away from the Montreal ghetto. In looking at the aspects that keep both women in the Montreal ghetto, it can be seen that for Lise Paquette, it is her mental mindset and morals that keep her trapped in her society. Her lack of morals and thirst for wealth, which lead her to sufferable consequences ultimately, keep her ensnared into her poor society. Lisette de Courval also suffers from not being able to make the right decisions for herself as she does not make a strong enough effort to separate herself from the women who she believes are shameful to be around. In comparing the two characters, it can be deduced that ultimately, people are responsible for the choices they make regarding their own lives, and must look at his/herself to see what changes they can make to themselves, before blaming others for their lack of success of happiness in life. ...read more.