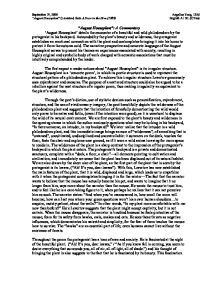 "August Houseplant": A Commentary 'August Houseplant' details the encounter of a beautiful and wild philodendron by the protagonist in his backyard. Astounded by the plant's beauty and wilderness, the protagonist establishes an emotional connection with the plant and contemplates bringing it into his home to protect it from the autumn cold. The narrative perspective and concrete language of the August Houseplant serves to present his themes as experiences associated with society, resulting in highly original and symbolic body of work charged with semantic associations that must be intuitively comprehended by the reader. The first aspect a reader notices about "August Houseplant" is its irregular structure. August Houseplant is a 'concrete poem', in which its poetic structure is used to represent the structural pattern of a philodendron plant. To achieve this irregular structure Levertov generously uses enjambment and caesuras. The purpose of a scattered structure could also be argued to be a rebellion against the neat structure of a regular poem, thus making irregularity an equivalent to the plant's wilderness. ...read more.

With this, Levertov has now established the main features of the plant, that it is wild, displaced and large, which leads us to empathize with it when the protagonist contemplates bringing it in for the winter-The fact that the narrator wants to believe that the mouse has actually become his pet, and wants to imagine that it no longer fears him, says more about the narrator than the mouse. He wants the mouse to trust him, and to feel like he is a care-taking figure to it, when perhaps he realizes that it can not perceive him as such. The narrator states: "And when you're maneuvered in, how small the room will become; how can I set you where your green questions won't lean over human shoulders...to enquire, mutely patient, about the walls?" In other words, "Is my plant more comfortable with me now than before?" Here Levertov suggests that the plant might accept captivity, but it is not certain. ...read more.

Moreover, we realize that the protagonist is aware that the plant is wild and would not adapt to his small home, he states, "It's those long, ever-longer, reaching arms that don't fit through the door" This protection is both forceful and naive-the plant is wild and won't "fit through the door", thus the protagonist's intention of domesticating the plant is a naive The plant is personified; The plant is personified, By allowing the philodendron to plant to have such This personification not only establishes a feeling a wilderness of the plant but also establishes the persona's emotional attachment to the plant. Finding the plant so beautiful, the protagonist deliberates how he can bring the plant indoors, fearing that it will be cold once autumn arrives (-cold: "How am I going to carry you in, when it gets cold?"). September 19, 2008 Angelica Tong, 12BJ "August Houseplant" (Levertov) from A Door in the Hive (1989) English A1 HL (CYeo) ...read more.