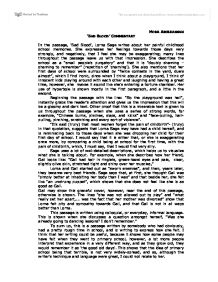 MONA ABULHASSAN 'BAD BLOOD' COMMENTARY In the passage, 'Bad Blood', Lorna Sage writes about her painful childhood school memories. She expresses her feelings towards those days very strongly, and negatively, that I feel she may be exaggerating; many lines throughout the passage leave us with that impression. She describes the school as a "small people's purgatory" and that it is "doubly shaming - shaming to remember" (repetition of 'shaming'). She also mentions that her first days of school were surrounded by "fierce contests in the yard, duels almost", which I find ironic, since when I think about a playground, I think of innocent kids playing around with each other and laughing and having a great time, however, she makes it sound like she's entering a torture chamber. ...read more.

in that quotation, suggests that Lorna Sage may have had a child herself, and is reminiscing back to those days when she was dropping her child for their first day of school. I would say that it is either that, or she is exaggerating once more, by comparing a child being at school for the first time, with the pain of childbirth, which, I must say, that I would find very silly. Sage uses a lot of well-detailed descriptions, which helps us to visualize what she is talking about. For example, when she describes how her friend, Gail looks like: "Gail had hair in ringlets, green-hazel eyes and pale, clear, slightly olive skin, stretched tight and shiny over her muscles," Lorna and Gail started out as "sworn enemies", and then, years later, they became very best friends. ...read more.

This passage is written using colloquial, or everyday, informal language. This is shown when she discusses a question amongst herself, "Was she already going to dancing lessons? I don't remember." To sum up, this is a passage written by somebody who had obviously, had a pretty rough time in school, and is writing to express how she felt. I think that her writing could be useful, because it shows how some people may have felt when they went to primary school, however, a lot more people interpret that experience in a very different way, and as they grow old, they would remember it as 'the good old days'. This shows that the idea of primary school being that terrible, is not very widely-spread, and so, although the writer's technique and language were great, I could not relate to her. ...read more.