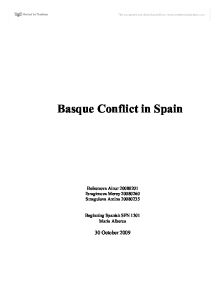 Basque Conflict in Spain Beikenova Ainur 20080201 Ibragimova Merey 20080260 Smagulova Amina 20080235 Beginning Spanish SPN 1301 Maria Alberca 30 October 2009 Presentation Outline Topic : Basque Conflict in Spain Introduction I. Conflicts are not entities in themselves. They have to be viewed and analyzed within the context of various factors; those that lead to conflict in the first place and also those that keep them fuelled. II. The Basque conflict in Spain is a result of cultural repression and intolerance. III. We propose to examine the Basque conflict with a particular focus on the Spanish interests in the matter and intent to present the historical context of the conflict in a socio-political manner, then move to the cultural implications of the issue, then analyze the cultural conflict that has both been born of and furthered Basque nationalism. I. Causes of Basque conflict A. Ideology B. Culture II. Consequences of Basque conflict A. Kidnappings-for-ransom B. Extortion C. Terrorist acts II. Solutions A. Refusing to negotiate with who it refers to as terrorists B. ...read more.

The argument that Fukuyama brings forth in his work; "The End of History", conjectures that history is composed of a string of ideological shifts brought about by conflict in an evolutionary manner. He argues that history is the cyclical build-up of new competing ideologies which escalated into a military conflict which leads to a victorious ideology and then the arrival of new competitors. In order to finance its operations, ETA has used kidnappings-for-ransom, extortion, and (less frequently) robberies. The main targets of such money-rising activities have been Basque entrepreneurs, who have since begun to abandon the Basque Country in large numbers in order to escape extortion or abduction by the terrorist group. In addition, the terrorist conflict has been frequently cited as deterrence for domestic and foreign direct investment in the Basque Country. Finally, although terrorist attacks have occurred in almost all Spanish regions, most of ETA's violent activity has been concentrated in the Basque Country. Almost 70% of the deaths caused by ETA in Spain during 1968-1997 occurred in the Basque Country. ...read more.

result in favor of independence, secondly it would mean an electoral defeat for the party putting it in action in Spain itself. The Basque country is too important both for economic and industrial reasons and also for the ethnically Spanish people living there. The government has to show it is ready to concede some more autonomy to the Basques .It is our belief that peace is not possible in the years to come in Spain without a radical reconsideration of the government as well as the unilateral support from both Spaniards and Basques of the dismantling of the Euskadi Ta Askatasuna. We believe that in some cases this unilateral front will need to engage in military action. The terrorist leaders of ETA are identifiable and can be eliminated publicly and legally Reference List Flash Points/World Conflict Basque-Spain Conflict http://www.flashpoints.info/countries-conflicts/Spain-Basque-web/Spain-Basque_briefing.html United States institute of Peace The Basque Conflict: New Ideas and Prospects for Peace http://www.usip.org/resources/basque-conflict-new-ideas-and-prospects-peace The Economic Costs of Conflict: A Case Study of the Basque Country Author(s): Alberto Abadie and Javier Gardeazabal Source: The American Economic Review, Vol. 93, No. 1 (Mar., 2003), pp. 113-132 Published by: American Economic Association Stable ?? ?? ?? ?? ...read more.