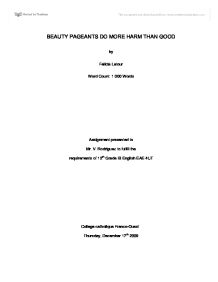 BEAUTY PAGEANTS DO MORE HARM THAN GOOD by Felicia Latour Word Count: 1 000 Words Assignment presented to Mr. V. Rodriguez to fulfill the requirements of 12th Grade IB English EAE 4UT College catholique Franco-Ouest Thursday, December 17th 2009 Confucius once said: "Everything has beauty, but not everyone sees it."1 Since the beginning of time, humans have always been judging others based on appearance. Despite the fact that we have accepted this human flaw, never until the invention of a beauty pageant have we willingly embraced it. Exclusively used for entertainment value, beauty pageants cause more harm than good due to their superficial nature. The male chauvinistic attitude behind beauty pageants makes objects of women and ultimately degrades them. These competitions are largely responsible for unnecessary spending as well as the promotion of false standards of beauty leading to serious issues in women linked to low self-esteem. First of all, doesn't the mere idea of awarding a woman a coveted title based on appearance seem superficial? ...read more.

From this, one can conclude that the judging of women's beauty in such pageants demeans women. The most popular beauty contest in the world, the Miss Universe Pageant, has been running annually since 1952, attracts around three billion viewers worldwide and awards a coveted prize of a two-year scholarship worth more than one hundred thousand dollars. As noble as the cash prize may appear, we must wonder how much money is invested by contestants of any beauty contest to provide for all their beauty needs such as cosmetic supplies, clothes, coaches, personal trainers, doctors, special food, etc... Furthermore, it is not only women that spend enormous amounts of money on the contests; governments and companies also play a huge part in the investment. In fact, the cancellation of the Miss Cambodia pageant was recently announced due to overwhelming poverty4. The government could simply not afford to continue the contest when thousands were suffering. ...read more.

Anorexia, bulimia, self-mutilation, mental health problems, depression and even suicide are side effects of low self-esteem brought on by pressure from beauty pageants8. The emotional, mental and physical suffering that women face due to unrealistic standards of beauty are largely due to the existence of beauty pageants, enforcing the idea they provide more harm than good. Beauty pageants are nothing more than a parade of women there to be judged on their appearance. Degrading to women, a waste of money and fatal to women's self-esteem, these contests remain an uncivilized way to entertain the masses. It is important to remember that although the contests may gratify a single woman for two minutes, true achievement can only be measured by a person's acts and not their appearance. As Leo Tolstoy once said: "It is amazing how complete is the delusion that beauty is goodness"9. So amazing in fact, that human kind would continue for over a century to participate in the gross and harmful event that is a beauty pageant. ...read more.