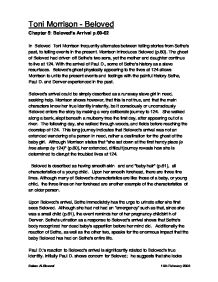 Toni Morrison - Beloved Chapter 5: Beloved's Arrival p.60-62 In Beloved Toni Morrison frequently alternates between telling stories from Sethe's past, to telling events in the present. Morrison introduces Beloved (p.60). The ghost of Beloved had driven off Sethe's two sons, yet the mother and daughter continue to live at 124. With the arrival of Paul D., some of Sethe's history as a slave resurfaces. Beloved's ghost physically appearing to the lives at 124 allows Morrison to unite the present events and feelings with the painful history Sethe, Paul D. and Denver experienced in the past. Beloved's arrival could be simply described as a runaway slave girl in need, seeking help. ...read more.

This long journey indicates that Beloved's arrival was not an extended wandering of a person in need, rather a destination for the ghost of the baby girl. Although Morrison states that "she sat down at the first handy place(a tree stump by 124)" (p.60), her extended, difficult journey reveals how she is determined to disrupt the troubled lives at 124. Beloved is described as having smooth skin and and "baby hair" (p.61), all characteristics of a young child. Upon her smooth forehead, there are three fine lines. Although many of Beloved's characteristics are like those of a baby, or young child, the three lines on her forehead are another example of the characteristics of an older person. ...read more.

Paul D.'s reaction to Beloved's arrival is significantly related to Beloved's true identity. Initially Paul D. shows concern for Beloved; he suggests that she looks thirsty (p.61), and is worried about what illness she may have. However, he soon becomes suspicious of her, and a conflict begins between Paul D. and Beloved, similar to his conflict with Denver, linking Beloved as a child of Sethe. The arrival of Beloved is the turning point in the book. Her arrival opens up many doors to everyone involved. Denver begins to show maturity in caring for the ill Beloved and Sethe finally reveals more about her past helping her to sort things out. Salem Al-Shawaf 14th February 2008 Salem Al-Shawaf 14th February 2008 ...read more.