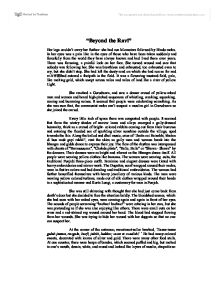 "Beyond the Ravi" Her legs couldn't carry her further: she had run kilometers followed by Hindu mobs. In her eyes was a pain like in the eyes of those who have been taken suddenly and forcefully from the world they have always known and had lived there over years. There was frowning, a painful look on her face. She turned around and saw that nobody was following her. She was breathless and exhausted, too exhausted even to cry, but she didn't stop. She had left the dusty road on which she had run so far and a<AWSShad entered a footpath in the field. It was a flowering mustard-field, pale, like melting gold, which swept across miles and miles of land like a river of yellow Light. She reached a Gurudwara, and saw a denser crowd of yellow-robed men and women and heard high-pitched sequences of whistling, creaking, squeaking, roaring and humming noises. It seemed that people were celebrating something. As she was sure that, the communist mobs can't suspect a muslim girl in Gurudwara so she joined the crowd. ...read more.

The sounds of people screaming "bachao! bachao!" were echoing in her ears, but she was pretending as if she was also enjoying like others. There were small cuts on her arms and a red-stained rag wound around her head. The blood had stopped flowing from her wounds. She was trying to hide her wound with her duppata so that no one can suspect her. At the corner of the entrance; sweetmeat-seller hawked, �Taaza-taaza gulab-jamun, rasgula, burfi, jalebi, laddoo; saste te swadish! � He had many-colored sweets, decorated with leaves of silver and gold. There were many other food stalls. At one counter, there were heaps of bandas, which seemed puffed and big, but melted in one's mouth, dosais, white, and round and looked like layers of muslin, chapattis so thin that one could lift fifty of them on a little finger. On another stall was pani-puri, a fried crisp filled with mixture of tamarind, chatt masala, chilli and mashed potatoes and grams. ...read more.

He looked like a typical Punjabi with fair complexion. He picked her up. His hands were gentle. He looked at her simultaneously holding her hand in his hand. He felt that her eyes were those goddamn eyes of blue that put the most valuable sapphires to shame with their incredible inner glow of astonishment and youthful attraction. He honestly felt that he could simply drown in those otherworldly eyes for all eternity. She was as beautiful as sunrise. Her face was round like a moon. Her hair was dark as the night, and her lips were as red as the rose. Her charm and beauty fascinated him. She slipped her hand from his hand and stared at him. Her heart starts beating faster. She felt as if her heart was saying to her that this man would help her out, But her brain was not accompanying her heart. He asked, "Are you Fine? " He was confused and did not know what more to say. However, he was sure that something was wrong that has made her face pale, and sorrow upon her brow. She didn't reply and was standing as quiet as a shadow. ?? ?? ?? ?? ...read more.