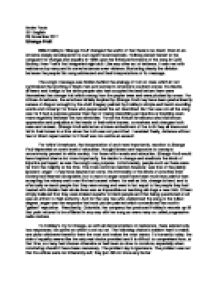 Billie Holidays Strange Fruit changed the world; of that there is no doubt.

Andre Foote IB1 English 28 November 2011 Strange Fruit Billie Holiday's 'Strange Fruit' changed the world; of that there is no doubt. Born in an America deeply enveloped in its own rapid metamorphosis, Holiday placed herself at the vanguard for change and equality in 1939 upon her initial performance of the song in Caf� Society, New York's first integrated nightclub. Like any other act of defiance, it was met with resistance by many and in some instances even violence; illustrating clearly the division between the people this song addressed and their interpretations of its message. The song's message was hidden behind the analogy of fruit on trees which in fact symbolized the lynching of black men and women in America's southern states; the blacks, different and foreign to the ...read more.

It enabled finally, defiance without fear of direct repercussion for it itself was too subtle an assault. For 'white' Americans, the interpretation of and more importantly, reaction to Strange Fruit depended on one's level of education, thoughtfulness and exposure to concepts uncommonly present in white society. For those with morals and education, Strange Fruit would have inspired shame but more importantly, the desire to change and eradicate the kinds of injustice portrayed; as was the song's very purpose. Unfortunately, people such as these were far from the majority at the time. The more common reaction however, was that of the plainly ignorant: anger. It may have dawned on some, the immorality of the kinds of atrocities their society had deemed acceptable, but to react in anger would have been much less painful than accepting the misery one's own life had caused others. ...read more.

Resultantly, Columbia, the company that produced Holiday's records up till that point refused to be affiliated in any way with her song as were many so called progressive radio stations. To Holiday's cry for change, as with all demonstrations of resistance, there existed only two responses; two paths on which to set out on. The following choice is seldom hard to make; one picks whichever benefits them the most and makes the most sense. To humanity today, the side of equality seems like the only real choice provided and it is difficult to comprehend how, at that time, so many had chosen otherwise or had been so slow to convince; especially when convincing shouldn't have been necessary. The problem lay in ignorance. The problem was not that the whites were not inherently evil; they just did not know any better. ...read more.