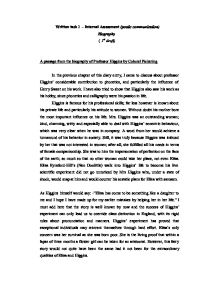 Written task 1 - Internal Assessment (poetic communication) Biography (1st draft) A passage from the biography of Professor Higgins by Colonel Pickering In the previous chapter of this diary entry, I came to discuss about professor Higgins' considerable contribution to phonetics, and particularly the influence of Henry Sweet on his work. I have also tried to show that Higgins also saw his work as his hobby, since phonetics and calligraphy were his passion in life. Higgins is famous for his professional skills; far less however is known about his private life and particularly his attitude to women. Without doubt his mother bore the most important influence on his life. Mrs. Higgins was an outstanding woman; kind, charming, witty and especially able to deal with Higgins' eccentric behaviour, which was very clear when he was in company. A word from her would achieve a turnaround of his behavior in society. Still, it was truly because Higgins was imbued by her that was not interested in women; after all, she fulfilled all his needs in terms of female companionship. ...read more.

She is the living proof that within a lapse of three months a flower girl can be taken for an aristocrat. However, this fairy story would not quite have been the same had it not been for the extraordinary qualities of Eliza and Higgins. As a teacher, he had endless energy, a determination to break the rules of the game and succeed in his lifelong yearning. Eliza was also determined to take advantage of the opportunity to move forward in life and acquire all the proper language diction and skills required to upgrade herself and get a job in a flower shop. An independent girl endowed with a self determination and a strong will, Eliza was unlike other girls from her own background; a self-supporting girl who proudly raised her head above prostitution and fought for her autonomy like a brave and honorable soldier, never failing herself and always succeeding in her clear-sightedness of both people and situations. ...read more.

Eliza threw Higgins' slippers at him. According to Eliza he actually said, "what does it matter what becomes of you?" She had earned her "freedom". Higgins could not understand her dilemma. Eliza was a social success but only on the surface without money or family. She could not progress forward and also she could not go back. Higgins, with no intention to become condescending, said his mother could find her, "some chap or other", to marry. She bitterly replied that because of her rise in social status, due to him, she was "not fit to sell anything else but herself". Eliza never forgave Higgins, although she and her husband moved into Higgins' house, with his complete agreement when their flower shop was temporarily in economic difficulties. This was characteristic of Higgins. He was never intentionally unkind but he rejected Eliza's demands for emotion because he felt himself and those around him should be above such needs. He regarded romantic love and sexual love in particular as animalistic. Liza nagged him all his life and he never dared to tease her. In fact, they were used to each other but they never really liked each other. ...read more.