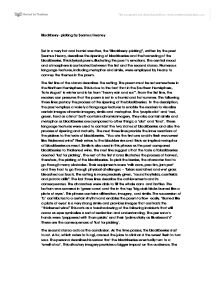 Blackberry- picking by Seamus Heaney Set in a very hot and humid weather, the 'Blackberry-picking", written by the poet Seamus Heany, describes the ripening of blackberries and the harvesting of the blackberries. This is lyrical poem, illustrating the poet's emotions. The central mood and atmosphere is contrasted between the first and the second stanza. Numerous language features, including metaphor and simile, were employed by Heany to convey the themes in the poem. The first line of the stanza describes the setting. The poem must be set somewhere in the Northern Hemisphere. This is due to the fact that in the Southern Hemisphere, 'late August' is winter and is far from "heavy rain and sun". From the first line, the readers can presume that the poem is set in a humid and hot summer. The following three lines portray the process of the ripening of the blackberries. In the description, the poet employs a variety of language features to enable the readers to visualize certain images-chromic imagery, simile and metaphor. ...read more.

The last three lines describe the achievements and its consequences. The characters were able to fill the whole cans and bottles. The bottom was covered in 'green ones' and the in the top 'big dark blobs burned like a plate of eyes'. This phrase contains alliteration, imagery, and simile. The succession of 'b' contributes to a certain rhythm and enables the poem to flow easily. 'Burned like a plate of eyes' is a very strong simile and provides images that contrasts the "thickened wine" This acts as a foreshadowing of the following incidents that will occur as eyes symbolize a sort of realization and understanding. The persona's hands were 'peppered with thorn pricks' and their 'palms sticky as Bluebeard's" These are the consequences of 'lust for picking'. The second stanza acts as the conclusion. As the time passes, the blackberries start to rot. A fur, which refers to fungi, caused the juice to stink and the sweet flesh to turn sour. The persona describes his sorrow that the blackberries eventually turn to a 'smell of rot'. ...read more.

Then it comes to poverty and the start of menstruation, 'summers blood'. The peak of maturity comes with the 'big dark blobs' and the 'eyes' to foreshadow and understand deep ideas and concepts, thus, adulthood. 'rat-grey fungus' can easily be a comparison to old age. The structure of the poem is also extremely significant as, in a way, the structure relates closely to the theme. The first stanza, which describes the ripening and the process of maturation, is very long compared with the second stanza, which illustrates death and loss. This shows that it takes a long time for people to mature and understand life. However, just as they realise the truth of life, people lose power and strength in a short period of time and eventually dies. Progression of time, process of maturity and unavoidable death are all predominant themes conveyed throughout the poem. Diverse language features, such as simile, metaphor, imagery, rhythm, alliteration, and structure all reinforce the setting of a hot summer's day, the first person narrative, and the contrasting atmosphere of the first stanza and the second stanza. These literary features, in turn, contribute to the illustration of the central themes. ?? ?? ?? ?? ...read more.