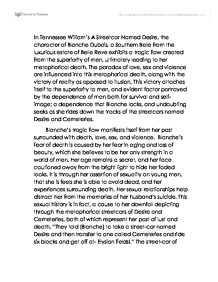 Blanche's Dubois as a Tragic Character

In Tennessee William's A Streetcar Named Desire, the character of Blanche Dubois, a Southern Belle from the luxurious estate of Belle Reve exhibits a tragic flaw created from the superiority of men, ultimately leading to her metaphorical death. The paradox of love, sex and violence are influenced into this metaphorical death, along with the victory of reality as opposed to illusion. This victory attaches itself to the superiority to men, and evident factor portrayed by the dependence of man both for survival and self-image; a dependence that Blanche lacks, and undoubting seeks as she rides down the tracks of the streetcars named Desire and Cemeteries. Blanche's tragic flaw manifests itself from her past surrounded with death, love, sex, and violence. Blanche's fear of death is caused by her fear in aging and loss of beauty, which she believes to be her only strength in a world of men. Her age remains a secret, and her face cautioned away from the bright light to hide her faded looks. ...read more.

Her family's decline, being caused by her male ancestors, likely colours her vulnerability to men, ultimately leading to her degradation under masculine authority. After the tragic suicide on her young husband, Blanche thirsts for something to the fill the empty hole in her heart; a hole that a male companion could provide for her. A man would be a means of happiness and survival. For a man, a woman would be a means of control. Williams addresses the Napoleonic Code, "according to which what belongs to the wife belongs to the husband and vice-versa." This reference is an act of justification that marriage constitutes the right to possession, and for Stanley, it is a right to authority. Blanche, often degrading Stanley for his animalistic and vulgar behaviour, would feel compelled to respect a man with knowledge; a knowledge that Stanley wishes to present with his reference to the Napoleonic code. ...read more.

The truth in this statement is non-existent of course where she is easily taken advantage of when Stanley rapes her nearing the end of the play. The foreshadowing in the statement "Now that you've touched them I'll burn them" is understood through the downfall of Blanche's characters, where her lies have been burned, and blown away as ashes, leaving her to face the consequences of her own delusion. Blanche Dubois's desperation and tragic past has brought her to Elysian Fields where her tragic flaw of lust brings her to the end of the tracks on the streetcar named Cemeteries: death. Tragic flaw created from the superiority of men, ultimately leading to her metaphorical death. These dual themes of lust and death form the basis of understanding for the downfall of illusion at the hands of Stanley. This superiority of men, in addition to the fragile illusion Blanche has created results in the inevitable loss of stability, and is ultimately, the foundation of thought in the Streetcar named Desire. ...read more.