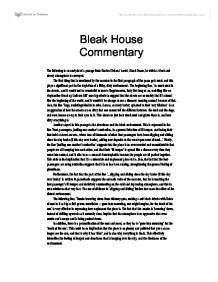 Bleak House Commentary The following is an analysis of a passage from Charles Dickens' novel, Bleak House, in which a bleak and dreary atmosphere is conveyed. The first thing that is mentioned by the narrator in the first paragraph of the passage is mud, and this plays a significant part in the depiction of a filthy, dirty environment. The beginning line, 'As much mud in the streets...and it would not be wonderful to meet a Megalosaurus, forty feet long or so, waddling like an elephantine lizard up Holborn Hill' uses hyperbole to suggest that the streets are so muddy that it's almost like the beginning of the world, and it wouldn't be strange to see a dinosaur roaming around because of that. Also, the line 'Dogs, undistinguishable in mire. Horses, scarcely better; splashed to their very blinkers' is an exaggeration of how the streets are so dirty that one cannot tell the different between the mud and the dogs, and even horses are up to their eyes in it. This shows us just how much mud and grime there is, and how dirty everything is. ...read more.

The fact that the smoke is 'lowering' down, instead of drifting upwards as it normally does, implies that the atmosphere is so oppressive that even smoke can't escape and is being pushed down. In addition, there is a personification of the soot and snow, as they have 'gone into mourning' for the 'death of the sun'. This could be an implication that the place is so gloomy and polluted that you can no longer see the sun, and that is why it has 'died', and is also why everything is black. This effectively intensifies the feeling of despair and dreariness that is hanging over the city, and the bleakness of the environment. The second paragraph of this passage concentrates mainly on fog and how it has been personified into a shadowy demon from which there is no escape. The first line of the second paragraph begins with 'Fog everywhere', and this alone is a very abrupt, aggressive statement that makes us feel, once again, slightly claustrophobic, as though there is fog pressing in all around us and that there is no escape from it. ...read more.

Once again, this creates the feeling of claustrophobia and makes it seem overwhelming as there is so much fog and there's no way out. The structure of these this passage is very interesting to note. The first paragraph is almost conversational, as though the narrator is describing to us the many events of the day, while the second paragraph suddenly switches to more somber, grave narrative of the fog, and this affects us and makes us feel uneasy of the fog. This is also partly because the passage is written in the present, and so it involves us, makes us feel as if we are there in the dreary environment. Additionally, the elongated syntax of the sentences mirrors the long, miserable day and the never-ending fog, and this intensifies the gloomy feeling we get from it. In conclusion, this passage from Bleak House uses many different techniques such as personification, hyperbole and tone of voice to effectively express the dirty and gloomy environment and the general feeling of misery and despair. By: Samantha Word Count: 1,079 words ...read more.