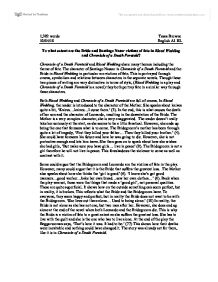 Blood Wedding and Chronicle of a Death Foretold

In Chronicle of a Death Foretold, the idea of fate is more prominent than in Blood Wedding. The title alone makes it clear to the reader from the start what is going to happen. Also, from the beginning of chapter one, the reader knows that Santiago is going to die, 'On the day they were going to kill him, Santiago...' (1). This portrays the idea of his fate being set as the reader is given the outcome of the novel from the start. This cannot be changed. One of the omens that are portrayed in the novel is the letter that Santiago never reads. If he had read the letter on his way out, he might never have been killed. However, he misses it on his way out of the door, which also makes things very frustrating for the reader. Although we know that Santiago will die in the end, we are still hoping for the best, as he is the novel's protagonist. The way the book is structured also supports the idea of a set fate. The book starts with the outcome then tells the story from the beginning. This shows how Santiago is trapped in a cycle; he is a victim of fate because his death is completely inevitable. At the beginning of the novel, the narrator reveals that Placida is able to interpret dreams quite well. ...read more.

The horse in the lullaby is a symbol for the Leonardo's horse. Leonardo's horse is a means of transportation for him to get to the Bride. This relationship that he is able to have with the Bride, is ultimately the reason for his and the Bridegroom's downfall. The tragedy is elevated in Blood Wedding as, no matter what she decides to do, the Bride will be unhappy. If she decides to stay with the Bridegroom, she will be in a despondent marriage. However, if she decides to be with Leonardo, she will let down her family and various other companions which shows how trapped she is and how tragic her life is. This is why she suffers the most. The characters of Santiago Nassar and the Bride in the publications Chronicle of a Death Foretold and Blood Wedding respectively, are victims of fate to a great extent. This is portrayed through character relations, omens and symbols. The only difference is, however, that Santiago dies at the end. He does not feel loss; he just feels physical (and emotional) pain. The Bride, however, feels loss because two men have died as a of her decisions, one of which she was in love with. There are many aspects that both link Chronicle and Blood Wedding and distinguish them. Both their messages are the same though: your fate is set and cannot be changed. ...read more.