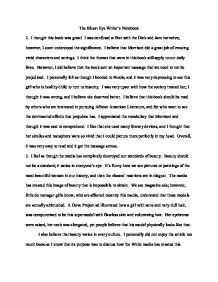 The Bluest Eye Writer's Notebook 2. I thought this book was great! I was confused at first with the Dick and Jane narrative; however, I soon understood the significance. I believe that Morrison did a great job of creating vivid characters and settings. I think the themes that were in this book still apply to our daily lives. However, I did believe that the book sent an important message that we need to not be prejudiced. I personally felt as though I bonded to Pecola, and it was very depressing to see this girl who is healthy child to turn to insanity. I was very upset with how the society treated her; I thought it was wrong, and I believe she deserved better. I believe that this book should be read by others who are interested in pursuing African American Literature, and for who want to see the detrimental effects that prejudice has. I appreciated the vocabulary that Morrison and thought it was east to comprehend. I like that she used many literary devices, and I thought that her similes and metaphors were so vivid that I could picture them perfectly in my head. Overall, it was very easy to read and it got the message across. 3. I feel as though the media has completely destroyed our standards of beauty. Beauty should not be a standard; it varies in everyone's eye. It's funny how we see pictures or paintings of the most beautiful women in our history, and then the classes' reactions are in disgust. ...read more.

Throughout the book, Pecola is on a quest to find blue eyes so that she will be accepted by society. Beauty in this book is standardized as being white and having blue eyes; thus, Pecola feels absolutely rejected by society to the point where she goes insane (then believes she has blue eyes). Geraldine believes she is superior to the dark skinned people and sees beauty in her blue-eyed cat. She maintains her house to keep up white standards where "little lace doilies were everywhere-on arms and back of chairs, in the center of a large dining table, on little tables" (Morrison 89). Pecola believes that she is becomes closer to the blue-eyes standard when "we knew she was fond of the Shirley Temple cup and took every opportunity to drink milk out of it just to handle and see sweet Shirley's face (Morrison 23). Pauline neglected her family, possessions, and house because "it had no beauty and style"; thus, she believed she was a bigger part of the Fisher household (Morrison 127). Claudia is the only character in the novel that foils this concept of beauty because "she destroys white dolls" (Morrison 22). This is because Claudia is still very young and has not been exposed to the expectations of society. Beauty plays an integral theme in this novel, and it play a crucial role in Pecola's life when she becomes insane. Abandonment: Abandonment is seen several times throughout the novel and almost every character experiences this. ...read more.

Roots and Community: It is the community and society's fault for creating the standard of beauty. Innocent Pecola is driven to the point of insanity because she wants blue eyes to become accepted. The reader understands that Pecola is already rejected from society because her family is put outdoors which is considered "the real terror of life" (Morrison 17). Because Pecola's milieu starts off as very rotten, it can be foreshadowed that the terror, shame, and guilt, will follow her throughout the book. All of the characters' milieu reflect how they are characterized and interact with each other. Cholly group up without his mother and farther; thus, he has becomes this languid man who consequently rapes his daughter. 7. Although I found the use of the children's primer very confusing, I soon understood the significance. The excerpts from the children's primer progress into unreadability or chaos. This primer represents an idealized picture of childhood, family life, and home. Because the purpose of this primer to teach children how to read, this foreshadows that the book will concern how children learn to interpret their world. Because the punctuation and grammar is changed, the reader becomes uncomfortable with the shortness and abruptness of the excerpt. These primers lack cohesion; also, the children in this novel lack ways to connect the disjointed (often frightening experiences). Although this primer sees very ideal and perfect, Jane is left in isolation, for everyone seems to refuse and direct communication with her. The lack of connections between sentences mirrors the lack of connection between the individuals in this story. The repetition implicitly warns us to expect a story that is vivid but fragmented. ...read more.