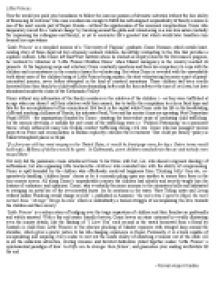 Book Report on &quot;Little Princes&quot; by Conor Grennan. Volunteering with victims of child trafficking in Nepal.

﻿Little Princes How far would you push your boundaries to follow the insecure passion of altruistic salvation without the dire ability of foreseeing its outcome? One man is audacious enough to fulfill his self-assigned responsibility of family reunion in one of the most remote part of Nepal- Humla ? without the apprehension of the imminent complications. Conor who desperately craved for a ?radical change? by traveling around the globe and volunteering in a war-torn nation (initially for impressing his colleagues and family); is yet to encounter life?s greatest trial which would later transform him beyond his expectations. ?Little Princes? is a compiled memoir of a ?University of Virginia?; graduate, Conor Grennan ,which entails heart-rending story of those deprived but extremely resilient children; deceitfully contrasting to the title that provides a euphoric outlook. After Conor left East/West Institute where he worked as Deputy Director for Governance program; he ventured to volunteer at ?Little Princes Children Home? when Maoist insurgency in the country reached its pinnacle. ...read more.

But back in the capital while Conor risks his life in the breathtaking cliffs and numbing chilliness of Humla, his intimates Farid, Viva and his mentor Anna are operating Next Generation Nepal (NGN) --the organization founded by Conor-- assisting the benevolent cause of combating child trafficking. As the memoir develops, it unfolds the root cause of the trafficking woes i.e. ?Political Patronizing? as a prominent theme; which influenced many like Golkka conduct trafficking during civil war. Conor who has managed various projects on Peace and reconciliation in Balkan explicitly criticizes the recruitment ?One child per family ?policy in Maoist stronghold places in Nepal. ?If a five-year-old boy went missing in the United States, it would be front-page news for days. Entire towns would hold vigils. Millions of dollars would be spent?In Kathmandu, seven children vanished into thin air and nobody even missed them.? Not only did the passionate cruise introduced Conor to his future wife but, Liz, who shared congruent ideology of selflessness; but also appeasing little teachers(the children) ...read more.

With a fair and reader friendly brevity, Conor leaves no stone unturned by vividly illustrating even the minute details; like the flashing of ?I Love You? each second in the watch borrowed from a friend by Santosh (a child from Little Princes) or the obscure plucking of blanket repairers with stringed harp around the shoulder, which gives a poetic justice to his life-changing experience in Nepal. Personally, it is a book capable of encapsulating and inspiring every reader to sort out the innate ability of absorbing evenness out of the odds. All in all the audacious adventure, riveting romance and devoted dedication yoked together makes ?Little Princes? a quintessential paradigm of how ?real life can be stranger than fiction?; and guarantees your reading worthwhile till the end. I have already made a difference in the lives of trafficked children as portion of my purchase is a contribution to Next Generation Nepal (NGN) working for the same altruistic cause; so when are you getting yours! - Roman Hajur Khadka ...read more.