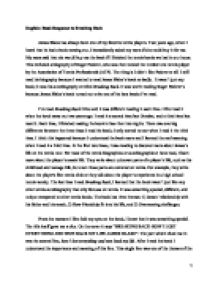 Book Response to &quot;Breaking Back&quot; by James Blake, an autobiography of a tennis player.

English: Book Response to Breaking Back James Blake has always been one of my favorite tennis players. Two years ago, when I heard that he had a book coming out, I immediately asked my mom if she could buy it for me. My mom said that she would buy me the book if I finished the tennis books we had in our house. This included a biography of Roger Federer, who was then ranked the number one tennis player by the Association of Tennis Professionals (ATP). The thing is I didn't like Federer at all. I still read his biography because I wanted to read James Blake's book so badly. It wasn't just any book; it was his autobiography entitled Breaking Back. It was worth reading Roger Federer's because James Blake's book turned out to be one of the best books I've read. I've read Breaking Back thrice and it was different reading it each time. I first read it when the book came out two years ago. I read it a second time last October, and a third time last month. Each time, I finished reading the book in less then two nights. There was one big difference between the three times I read the book; I only started to tear when I read it the third time. I think this happened because I understood the book more and I learned the real meaning when I read it a third time. In the first two times, I was reading to discover more about James's life on the tennis tour. For most of the tennis biographies or autobiographies I have read, I learn more about the player's tennis life. ...read more.

Although playing poker and watching TV may not be the life of a "normal" person, this life at home was still different for James. It was enough for him to realize how life is like when you're not traveling the world to join tournaments and play tennis. It was enough for him to get a slight idea of what a non-tennis player's life is like. Aside from learning new things about others, James also learned a lot of things about himself. The obvious thing he realized was that he loved tennis. He always knew this, but his recovery period proved this even more. No matter how severe an injury was, James wanted to get back to playing tennis. At some points, he would go as far as disobeying a doctor's order by going out to the courts to hit. Another thing James learned was that if his dad and coach were not alive, he wouldn't have made it through everything. James' relationship with his father and his coach is an important theme of the book. Thomas Blake Sr. and Brian Barker instilled values in James which helped him throughout the tough times of his life. It was because of these values that James never gave up and made it through everything. Aside from getting him into tennis, they taught James to work hard and try his best in everything he did. If it wasn't for them, James would have easily given up on tennis when the challenges struck him. Another thing that helped him through everything was James' friends. Friendship is another important theme of the book. ...read more.

When I watched James live at the Australian Open, I idolized him even more because I saw him play in real life. Reading his book pushed it to the extreme. I not only like the way he plays tennis, but I admire all of the things he was able to get through off the court. I learned about the struggles he went through and the crushing events of his life. I also learned more about James personality. I discovered that he was a hard working young man. Most importantly, I learned that tennis played a very important part in his life and he loved the sport. He will always love tennis and even major injuries would not get in the way of this devotion. This book is an inspiration for both tennis players and non- tennis players alike. It is an inspiration for tennis players because it proves that if you love the sport, nothing will stop you from playing as long as you work hard to get back. If you're not a tennis player, this book can still serve as inspiration because it encourages hard work. It proves that as long as you set a goal for yourself and you are devoted towards achieving it, nothing will get in your way. Inspiration is one reason why I love this book but there are other reasons why Breaking Back is my favorite book. I can relate to the tennis aspects of James life, the book touches me emotionally, and it is fun to read about my favorite tennis player's life. It's the life of a young American who loves tennis and works through any obstacles which gets in the way of his passion. ?? ?? ?? ?? 1 ...read more.