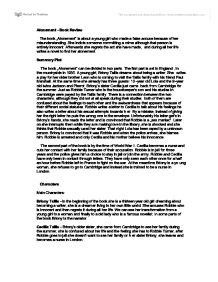 Atonement - Book Review The book "Atonement" is about a young girl who made a false accuse because of her misunderstanding. She indicts someone committing a crime although that person is entirely innocent. Afterwards she regrets the act she have made, and during all her life writes a novel to find her atonement. Summary Plot The book "Atonement" can be divided in two parts. The first part is set in England , in the countryside in 1935. A young girl, Briony Tallis dreams about being a writer. She writes a play for her older brother Leon who is coming to visit the Tallis family with his friend Paul Marshall. At the same time she already has three guests: 15-year old Lola and the 9-year old twins Jackson and Pierrot. Briony's sister Cecilia just came back from Cambridge for the summer. Just as Robbie Turner who is the housekeeper's son and his studies in Cambridge were payed by the Tallis family. There is a connection between the two characters, although they did not at all speak during their studies both of them are confused about the feelings to each other and the awkwardness that appears because of their different social statuses. Robbie writes a letter to Cecilia to talk about his feelings he also writes a letter about his sexual attempts towards her. ...read more.

Robbie Turner - housekeeper's son, works at the Tallis family, his studies in Cambridge were payed by Briony's parents, he was suppose to become a doctor after finishing his studies, he is deeply in love with Cecilia, he is accused as being a rapist and needs to spend 3 years in jail and after goes to the army and fights in France. The character I find the most interesting is Cecilia. She is a beautiful young woman that is not sure what to do with her life, she is also confused with her feelings to Robbie because of their difference in social groups. But she decides not to think about that, she follows her feelings and opens her heart to him. Although I never experienced Cecilia's situation i can relate to her and understand her choices. I like her character because there are parts of her that are similar to mine. The author makes her character quite mysterious since we don't know much about her, I like that way of writing because i can imagine the rest. Comments on style The book is divided into four chapters, in the beginning the author very slowly but very precisely describes the setting. There is many developed description about the place and time however less about the characters. ...read more.

It is the most romantic moment of this story and probably one of the most romantic book extracts I ever read in my life. We can figure out that the author compares himself with Briony who is the writer in the story just like him but in reality. We can assume that the author had a similar experience to what happened to the young girl. Possibly just like her made a mistake that had a impact on others people life, regretted it for all his life and then wrote this novel as his atonement. The story of the novel and descriptions of the character's feelings are very sad and while reading it I felt sorrowful. After finishing it, some parts of the book stayed in my head for a while, it made me think about how a innocent person can be accused to do something they did not and how it can change the rest of theirs life. How two people can be separated without a real reason and not be able to see each other. How a misunderstanding of a child could entirely change others life. I recommend this book to everyone who likes sad, love stories. This book is very romantic and it shows how love can be very strong and painful when forbidden. It is a beautiful book with amazing descriptions of feelings and the setting. It takes the reader away, into a different place and times. ...read more.