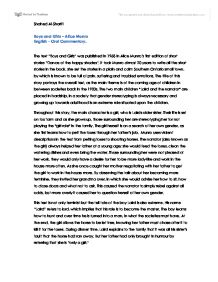 Boys and Girls - Alice Munro English - Oral Commentary. The text "Boys and Girls" was published in 1968 in Alice Munro's first edition of short stories "Dance of the happy shades". It took Munro almost 20 years to write all the short stories in the book. she set the stories in a plain and calm Southern Ontario small town, by which is known to be full of pain, suffering and troubled emotions. The title of this story portrays the overall text, as the main theme is of the coming age of children in between societies back in the 1900s. The two main children *Laird and the narrator* are placed in hardship, in a society that gender stereotyping is always necessary and growing up towards adulthood is an extreme role situated upon the children. Throughout this story, the main character is a girl, who is Lairds older sister. Their life is set on fox farm and as she grows up, those surrounding her are stereotyping her for not playing the *girl role* in the family. The girl herself is on a search of her own gender, as she first learns how to pelt the foxes through her father's job. Munro uses violent descriptions in the text from pelting foxes to shooting horses. ...read more.

For example, the father is a fox farmer with a hired man named Henry Bailey and the house-work is the job of the mother. There was a sense of allusion when the narrator stated that her father's favorite book in the world was Robinson Crusoe.The narrator then expresses her life, the reader understands that the girl has high imaginations of a boy with physical, strong, courageous and an adventurous life that she only wished she had. Munro portrays feminism of her main character when dealing with muscular activities through every day of her life. An example of the girl portraying her male quality is as soon as Laird would fall asleep at night and she would curl herself up under her bed covers and tell herself bedtime stories that depict herself as a hero, as she stated: "I shot two rabid wolves who were menacing the schoolyard (the teachers cowered terrified at my back). Rode a fine horse spiritedly down the main street of Jubilee, acknowledging the townspeople's gratitude for some yet-to-be-worked-out piece of heroism." From the readers point of view the narrator is placed in a world of men that learn violence is the only way to live life and the only female surrounding the girl is her mother, which is not much of a role model throughout the story. ...read more.

By doing so, her father has become aware that she has lost her innocence now and she's becoming a 'lady'. However, the male stereotype against her brother was different. This was placed when he had the chance to leave on the horse hunt. Laird came back with horse blood on his arm which symbolized the man's job. Laird announced what his sister (the narrator) had done, but her father did not get mad at her simply because "she's only a girl". Munro had left the powerful point of the story at the end, by revealing the true identify of genders by contrasting between a female and male. That by this time the emotional side of the narrator was revealed, for she had great difficulty swallowing her food and began to cry. This symbolised the true aspect of being a girl. Society back in those days and in some places nowadays have certain rules in which genders can only behave in such a way. In some cultures males are taught at a young age how to hunt and not show any emotion and females are taught how to do housework and behave in a lady-like manner. This story overall brings forth the impression of how societies rules can alter a person's own self-concept. ?? ?? ?? ?? Shahed Al-Sharifi ...read more.