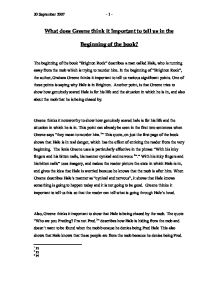 Greene thinks it important to tell us this because being chased by the mob is different from being pursued by anyone else because the mob is notoriously dangerous. In the beginning of the book, Greene only mentions one member of the mob, whose name we do not find out. Greene mentions that he is short tempered and describes some of his features. The boy's short temperedness is apparent when the boy loses his calm when Ida is singing and drops his glass on to the floor. Greene describes the boy to have fair smooth skin and eyes with an effect of heartlessness With a face of starved intensity and a hideous, unnatural pride. This use of imagery makes gives the image of a sinister, menacing face. Since only one of the mob members is mentioned in the beginning of the book, this gives the idea that perhaps this boy is special in some way, maybe even the leader. In the first eight pages of the "Brighton Rock", Greene thinks it important to tell us why Hale is in Brighton. ...read more.

When he realizes this, it would be logical for him to deter from his schedule so that the mob cannot find him. There is irony in the fact that he is too stubborn to do so. "He was damned, he told himself", "if he'd let that mob frighten him into spoiling his job5." This makes the reader assume, that he values his job over his life. It is possibly the prospect of losing his life that makes him think so irrationally. Greene thinks it important to tell us this because it has a direct link to his death. If he did not work for the newspaper, the mob wouldn't have known where he was going to be and he might not have died. Overall, Greene thinks it important to tell us three main points in the beginning of the book: Why is Hale in Brighton? How genuinely scared Hale is for his life? Also, that he is being chased by mob. All these points are important in relation to the rest of the book. Word Count: 914 1 P3 2 P3 3 P5 4 P6 5 P7 ?? ?? ?? ?? 30 September 2007 - 1 - ...read more.