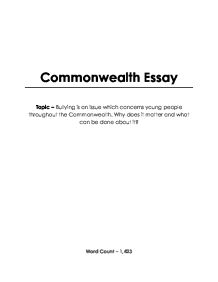 Commonwealth Essay Topic - Bullying is an issue which concerns young people throughout the Commonwealth. Why does it matter and what can be done about it? Word Count - 1,423 Everyday thousands of young people start off their day with the fear of being bullied. It is common not amongst a specific race, class, religion, country or continent but worldwide. So, first of all what is bullying? Bullying is an act of harassing or persecuting another person intentionally either verbally or physically. Bullying is something that everyone, especially the young people encounter in life in some way, they may have been bullied themselves at one stage or may have bullied someone else, seen someone being bullied, heard of a case of bullying by friends or in the media. Bullying can take many forms and it arises out of all sorts of reasons. People, usually do it because it satisfies them in one way or the other, usually they enjoy the sense of power. Bullying violates the human rights and it has crucial effects on both the victims and the bullies themselves. Therefore it should not be taken lightly or left alone as something that is part of a human nature. It may not be possible to eliminate it completely but it can be surely eliminated to a great length. Bullies lack in certain skills of appreciating others lifestyle. ...read more.

The person receiving bullying is not the only one depressed; others may be influenced as well. The bullies themselves are also affected negatively and perhaps indirectly. Bullies success in life may be at risk; first of all they are likely to fail their education career and then lack in social life. Bullying may start from school years as an activity for fun or self-satisfaction but it may lead to more violent behavior as bullies grow up. Bullies may have the support of some other friends who are also bullies but as they grow up they fail in their social life because of their behavior which disables them of making new friends and they end up with poor social skills and lack in feelings and understanding. In short words, the bullies are likely to have long-term negative effects on their lives. Bullying is an ongoing issue which needs to be resolved somehow. Fortunately there are many ways to fight bullying. It has significant negative influences, so some serious actions should be taken to eliminate it or at least reduce it. The best way to get to the youngsters is through schools and institutions. First of all institutes should have clear anti-bullying policies. The best way to diminish bullying is by making pupils in every school and other institutions aware of the negative side effects of bullying on the victim and the bullies themselves as well. ...read more.

At many times bullying takes place in front of peers because the bullies want to create fear in other people. Usually people just stand and watch a person being bullied by a group of bullies and they do not interfere because they consider it as someone else's business. Perhaps they are afraid that if they interfere the bully might just pick on them next. So, everyone stays quiet which makes the bullies feel more powerful and confidence builds within them. So they feel that they can pick on anyone they want. If the society or the people stand up against the bullies, the bullying will vanish and a bully will think twice before bullying someone again. In conclusion, I would like to say that bullying is often disregarded as something of youngster's nature and it is assumed that they will learn and change with time but unnoticeably these bullying traits shape up the person's characteristics. These bullying attributes in childhood are carried on into adult life. On the other hand the victim of bullying may be negatively effected for a long time or even forever. So it is a serious issue which should be fought against in every institute not only individually but as a community and a society as a whole. Educating the youngsters in schools and colleges of what it really feels to be bullied and how it may affect the victim and the bully itself can really discourage people from becoming a bully. ?? ?? ?? ?? Page | 2 ...read more.