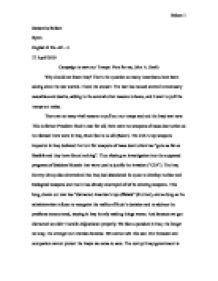 Campaign speech. Why should we leave Iraq? Thats the question so many Americans have been asking since the war started. I have the answer.

Samantha Belson Byers English II Pre-AP-2 27 April 2010 Campaign to save our Troops: Vote for me, John A. Smith Why should we leave Iraq? That's the question so many Americans have been asking since the war started. I have the answer. The war has caused several unnecessary casualties and deaths, adding to the several other reasons to leave, and I want to pull the troops out today. There are so many vital reasons to pull out our troops and end the Iraqi war now. This is former President Bush's war for oil; there were no weapons of mass destruction as he claimed there were in Iraq, Bush lied to us all (Baker). The CIA's top weapons inspector in Iraq declared the hunt for weapons of mass destruction has "gone as far as feasible and they have found nothing". ...read more.

The corrupt Iraqi government is wasting the billions we have given them to rebuild their country. I want to stop wasting our country's money and to pull out the troops today. The amount of money and casualties this war has caused is huge, with thousands dead and millions in debt. Iraq has cost us two trillion dollars- without interest, and with interest, an estimated 2.65 trillion dollars in debt (Bilmes and Stiglitz). This enormous amount of debt will take our future generations years and years to pay off. Forecasts of the cost are fueling a controversy over the impact on America's own budget and economy. Couldn't we spend that money here improving cities, schools, and healthcare? Essentially, rebuilding the U.S. is more important, than rebuilding Iraq. ...read more.

When the Iraqis had their election, we were all supposed to have been excited and happy, but a society that is stuck in the 12th century, that missed the Enlightenment, and entirely missed the liberal revolutions that swept through Europe and the Americas, was obviously bound to create a tyranny. They say the worst can be prevented as long as we stand between Iraq and the Dark Ages, but can we really stay there any longer, while we see whether forced Westernization will help them at all? By killing tens of thousands of Iraqis, we have only enraged those we are trying to help and multiplied recruits for terrorism. We should leave, and we should leave now. So, vote for me, John Abraham Smith, because a vote for me is a vote to bring our troops home- for good. ...read more.