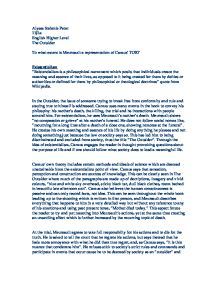 Alyssa Stefanie Peter 11JLa English Higher Level The Outsider To what extent is Meursault a representation of Camus' TOK? Existentialism "Existentialism is a philosophical movement which posits that individuals create the meaning and essence of their lives, as opposed to it being created for them by deities or authorities or defined for them by philosophical or theological doctrines" quote from Wikipedia. In the Outsider, the issue of someone trying to break free from conformity and rule and staying true to himself is addressed. Camus uses many events in the book to convey his philosphy: his mother's death, the killing, the trial and hs interactions with people around him. For existentialism, he uses Meursault's mother's death. Meursault shows "no compassion or grieve" at his mother's funeral. He does not follow social norms like, "mourning for a long time after a death of a close one, showing remorse at the funeral". He creates his own meaning and essence of his life by doing anything he pleases and not doing something just because the law or society says so. This has led him to being discriminated and excluded from society, thus the title "The Outsider". ...read more.

But that face was the colour of the sun and burning with desire: it was Marie's face." This makes him an existentialist as he creates his own meaning and joy in life. Nihilism "Nihilism is the rejection of objective reality or the possibility of an objective basis for morality. It means 'nothing' in Latin. It is also the rejection of established beliefs, as in religious morals, government and laws." Camus portrayed Meursault as somewhat of a nihilist too. Meursault does not accept religion, a form of established belief. He "refuses to see the chaplain who tries to converts him". Meursault also does not follow any social patterns or belong to any organizations, "basically he only eats, swims, work and sleeps". His life is akin to living in his own world. In society's point of view, he is considered a loner. This accounts for his belief that there is no meaning in life, and thus does not take part in social events as he finds them meaningless and useless. At the trial, Meursault does not even stray from what he believed was right. ...read more.