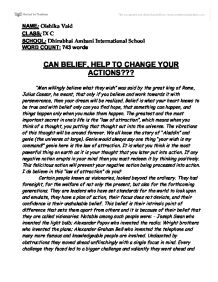 CAN BELIEF, HELP TO CHANGE YOUR ACTIONS???

NAME: Oishika Vaid CLASS; IX C SCHOOL: Dhirubhai Ambani International School WORD COUNT: 743 words CAN BELIEF, HELP TO CHANGE YOUR ACTIONS??? "Men willingly believe what they wish" was said by the great king of Rome, Julius Caesar, he meant, that only if you believe and work towards it with perseverance, then your dream will be realized. Belief is what your heart knows to be true and with belief only can you find hope, that something can happen, and things happen only when you make them happen. The greatest and the most important secret in one's life is the "law of attraction", which means when you think of a thought, you putting that thought out into the universe. The vibrations of this thought will be around forever. We all know the story of "Aladdin" and genie (the universe at large). Genie would always say one thing "your wish is my command!" ...read more.

Notable among such people were: - Joseph Swan who invented the light bulb; Alexander Popov who invented the radio; Wright brothers who invented the plane; Alexander Graham Bell who invented the telephone and many more famous and knowledgeable people are involved. Undaunted by obstructions they moved ahead unflinchingly with a single focus in mind. Every challenge they faced led to a bigger challenge and valiantly they went ahead and surmounted those challenges. The solutions they came up with in order to deal with the obstacles they faced were only a mean to an end. It was the power of this belief that helped them achieve their goal. Their self belief helped them to have a divine mind which is the one and only reality. Self belief leads to the 3 D's as we call it, Deliberation- a discussion and consideration of the reasons for and against a measure or question; Determination- to fix your mind onto your goal; Divination- unusual insight or intuitive perception. ...read more.

Galileo Galeli was a rare person who had many beliefs and succeeded in them, he was the first person who stated that the world was round and not "flat". Infact he even theorized the diameter of the world to be 40,000 km. he even invented the telescope which would show us the stars in detail. The world two famous painting "The Last Supper" and "Monalisa" was painted by Leonardo da Vinci. Belief can be shattered by a touch of sorrow if not brick strong. Belief is constructed with the help of thought and thoughts waver then belief can be decimated, leading to severe consequences. I am of the firm belief that if I believe I can do it then I know I can do it better than anyone else. Belief is my strong hope that will make me prosper. That is how I support my topic. "I believe I can fly". ...read more.