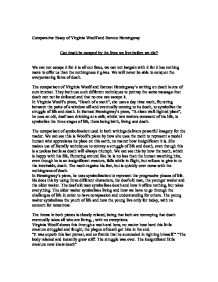 Can death be escaped by the lives we live before we die?

Comparative Essay of Virginia Woolf and Earnest Hemingway Can death be escaped by the lives we live before we die? We can not escape it for it is all our fates, we can not bargain with it for it has nothing more to offer us than the nothingness it gives. We will never be able to conquer the overpowering force of death. The comparison of Virginia Woolf and Earnest Hemingway's writing on death is one of sure interest. They both use such different techniques to portray the same message-that death can not be defeated and that no one can escape it. In Virginia Woolf's piece, "Death of a moth", she uses a day time moth, fluttering between the pains of a window sill and eventually coming to its death, to symbolize the struggle of life and death. In Earnest Hemingway's piece, "A clean well-lighted place", he uses an old, deaf man drinking at a caf�, whilst two waiters comment of his life, to symbolize the three stages of life, them being birth, living and death. ...read more.

"The body relaxed and instantly grew stiff. The struggle was over. The insignificant little creature now knew death" We can see she uses the line, "The rooks too were keeping one of their annual festivities; soaring round the tree tops until it looked as if a vast net with thousands of back knots in it had been cast up into the air; which, after a few moments sank slowly down upon the trees until every twig seemed to have a knot at the end of it" Woolf is just stating here that no one gets away. We all have the same fates. Death is inescapable. Earnest Hemingway shows a deeper meaning behind death than the fact that it takes all living beings. He demonstrates the little compassion and understanding the youth have for death and those walking its path. "I am sleepy now. I never get to bed before three o' clock. He should have killed himself last week." The younger waiter in "A clean well-lighted place", does not show compassion for this old, deaf man who is on the road to death, but is rather impatient with the ...read more.

Virginia Woolf makes use of tone in her piece to create emotions of pity, happiness, joy and sorrow. The fact that the moth displays that he has so much to live for, but in reality he is just an insignificant creature. The moth can not really be called a moth as he does not possess the true characteristics of a moth and so you feel pity for him as he is an outcast of his own species. When you read more about this creature you start to feel happiness and joy for him because, the fact that he does not belong anywhere does not bug him; he carries on with life, not minding the insignificant role he has been dealt in this world. Virginia Woolf's writing compared to Earnest Hemingway's writing is very different but because of the theme, being death, the two pieces are very interesting to compare. They deliver the same message in completely different ways, using different literary techniques. Hemingway makes use of dialogue in his writing, where as Woolf chooses not too, but they both convey an equally powerful message-Death can not be cheated no matter what we do, or how we live. . . ...read more.