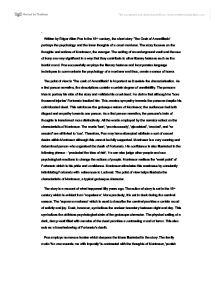 The Cask of Amontillado Written by Edgar Allan Poe in the 19th century, the short story 'The Cask of Amontillado' portrays the psychology and the inner thoughts of a cruel murderer. The story focuses on the thoughts and actions of Montresor, the avenger. The setting of an underground vault and the use of irony are very significant in a way that they contribute to other literary features such as the fearful mood. Poe successfully employs the literary features and incorporates language techniques to communicate the psychology of a murderer and thus, create a sense of horror. The point of view in 'The cask of Amontillado' is important as it assists the characterisation. ...read more.

Montresor is a very cunning and determined person who organised the death of Fortunato. His confidence is also illustrated in the following phrase - 'precluded the idea of risk'. He can also judge other people and use psychological reactions to change the actions of people. Montresor realises the 'weak point' of Fortunato which is his pride and confidence. Montresor stimulates this weakness by constantly intimidating Fortunato with references to Luchresi. The point of view helps illustrate the characteristic of Montresor, a typical grotesque character. The story is a recount of what happened fifty years ago. The action of story is set in the 18th century which is evident from 'roquelaure'. ...read more.

Irony is also created alongside pun. Mason has a double meaning; from the context it represents a family name while it also has a meaning of builder. The latter meaning closely relates to the actions of Montresor in which he builds a brick wall around Fortunato, burying him alive. Other language techniques such as the repetitive use of 'I' and short, brief sentences contribute to the flow of passage. They create speed and exasperation, which reflect on mood and the emotions of the persona. The grotesque short story 'The Cask of Amontillado' consists of literary features such as characters, setting and plot and they are reinforced by irony. These uses were successful in delivering the psychology of a murderer which inevitably links to the central mood of horror. ...read more.