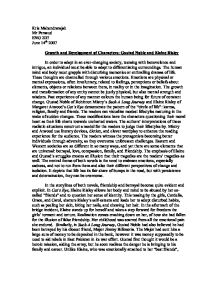 Cat's Eye and Such a Long Journey

Kris Mahendrarajah Mr Persaud ENG 2D7 June 14th 2007 Growth and Development of Characters: Gustad Noble and Elaine Risley In order to adapt in an ever-changing society, teeming with benevolence and intrigue, an individual must be able to adapt to differentiating surroundings. The human mind and body must grapple with disturbing memories or enthralling dramas of life. These thoughts are channelled through various emotions. Emotions are physical or mental expressions, often involuntary, related to feelings, perceptions or beliefs about elements, objects or relations between them, in reality or in the imagination. The growth and transformation of any entity cannot be justly physical, but also mental strength and wisdom. Past experience of any manner colours the human being for future of constant change. Gustad Noble of Rohinton Mistry's Such A Long Journey and Elaine Risley of Margaret Atwood's Cat's Eye demonstrate the pattern of the "circle of life": karma, religion, family and friends. The readers can visualize modest lifestyles maturing in the wake of sudden changes. These modifications have the characters questioning their moral heart as their life charts towards uncharted waters. The authors' interpretations of these realistic situations construct a model for the readers to judge their lifestyles by. Mistry and Atwood use literary devices, diction, and clever wordplay to enhance the reading experience for the audience. The readers witness the protagonists becoming better individuals through adversity, as they overcome unforeseen challenges. ...read more.

Elaine can be depicted as an immigrant from the start of her arrival in Toronto, different physically and mentally. She was raised as a boy, growing up with her brother Stephen, and was interested in different things than what "normal" girls would like. The other girls used Elaine like a lower being, in order to feel good about their sub-par appearance. The emotional pain Elaine felt was cured with the aid of the Virgin Mary. One can imagine the Virgin Mary speaking through Elaine as she rejected Cordelias' demands, freeing her from her prison of unjust treatment. Likewise, Gaustad and his kusti allowed him too overcome the various obstacles in his life. For example, his sacrifice to save an elder's life left him only with a minor limp, as his friend Major Bilimoria saved him from extensive damages. Also, as the stress began to mount to its peak on Gustad, the readers can easily identify his Gustad's misfortunes began turning the other way; Roshan recovering, Sohab returning, and learning of Jimmy's true motifs of the money. One can imagine the wall of divine beings, an idea of Gustad himself, helped alleviate these burdens. This wall became a temple itself, as provided a diverse mental comfort to those to look at it. Gustad would always praise the street artist who brought this monument to life, as it depicted the spiritual beings that the mortals worshipped to prosper in various aspects of life. ...read more.

Unlike Gustad however, Elaine had no one to turn to discuss her issues. Due to the traumatic ordeal with Cordelia, Grace and Carol, Elaine had her self-esteem and body image shattered as she scrambled for answers. These events lead her to living a very conservative life, almost turning into the person she very well hated. As both she and Cordelia became adults, it is almost as if there fortunes had turned tables, on opposite ends of life. The same with Gustad, his good-natured character allowed his suffering to be minimal. Religion and spirituality had different affects and meanings with both protagonists. Gustad believed all his problems would be answered if he prayed with the right mindset. Elaine thought that her troubles would just disappear because of the abilities of superior begins, and the reason why she began attending church. Material objects also play important roles, Gustad's black wall and Elaine's marble. The black wall represented isolation and protection from the horrors and filth of the outside world. Even though it was treated without value, it provided Gustad with a special comfort, and probably the reason he turned it into a shrine. Elaine used the cat's eye marble was used as a talisman, protecting her from her dilemmas. Even as she grew, one of her most influential paintings was the image of her marble, showing how she recovered from her horrific past. Thus, both Gustad Noble and Elaine Risley were impacted differently by family and friends, the themes of change and isolation, and most importantly, their understanding of their past experiences allowed them to mature as individuals. ...read more.