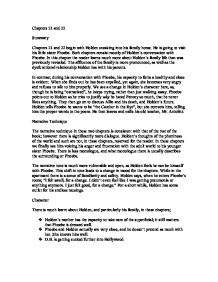 catcher in the rye summary chapters 21 and 22

Chapters 21 and 22 Summary Chapters 21 and 22 begin with Holden sneaking into his family home. He is going to visit his little sister Phoebe. Both chapters consist mostly of Holden's conversation with Phoebe. In this chapter the reader learns much more about Holden's family life than was previously revealed. The affluence of the family is more pronounced, as well as the dysfunctional relationship Holden has with his parents. In contrast, during his conversation with Phoebe, his capacity to form a healthy and close is evident. When she finds out he has been expelled, yet again, she becomes very angry and refuses to talk to him properly. We see a change in Holden's character here, as, though he is being "ostracized", he keeps trying, rather than just walking away. ...read more.

The narrative tone is much more vulnerable and open, as Holden feels he can be himself with Phoebe. This shift in tone leads to a change in mood for the chapters. While in the apartment there is a sense of familiarity and safety. Holden says, when he enters Phoebe's room; "I felt swell, for a change. I didn't even feel like I was getting pneumonia or anything anymore. I just felt good, for a change." For a short while, Holden has some outlet for his endless musings. Character There is much learnt about Holden, and particularly his family, in these chapters; * Holden's mother has the capacity to take care of the superficial; it still matters that Phoebe is dressed well. * Phoebe and Holden actually are very close, and he doesn't pretend as much with her. ...read more.

She is the embodiment of what Holden thinks needs to be protected, a symbol of what he wants to return to. There is another contradiction in Holden's character, in that, while he forms superficial relationships with people he refuses to try and make a deeper connection. However, he is always searching for someone to talk to. This is much like his attitude to sex, in that while he physically wants it, his fear of growing up and rejection holds him back. His father is perfectly summarized in his sleeping habits. Absent and unreachable; "you can hit my father over the head with a chair and he wont wake up," Death has come to people who were not phony. Holden maintains that Allie was near perfect, and not at all phony. James Castle, his classmate, died refusing to take back his opinion. It is also significant that both characters who die were not adults. Death is not the enemy, the world and aging are. ...read more.