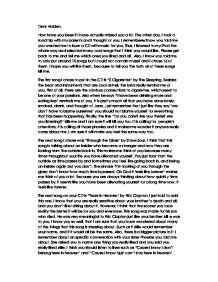 Dear Holden, How have you been? I have actually missed you a lot. The other day, I took a road trip with my parents and I thought of you. I remembered how you told me you wanted me to burn a CD with music for you. Thus, I listened to my iPod the whole way and selected many cool songs that I think you would like. Please get back to me and tell me which ones you liked and all. Also, I know you told me to only put around 10 songs but I could not contain myself and I chose 16 of them. I hope you will like them, because to tell you the truth all of these songs kill me. The first song I chose to put in the CD is "3 Cigarettes" by The Sleeping. Besides the beat and instruments that are cool as hell, the lyrics really remind me of you. First of all, there are the obvious connections to cigarettes, which seem to be one of your passions. Also when he says "I have been drinking more and eating less" reminds me of you. It is pretty much all that you have done lately, smoked, drank, and thought of Jane. Just remember that just like they say "we don't have to blame ourselves" you should not blame yourself for everything that has been happening. Finally, the line "Do you care? Are you there? Are you listening?" kills me and I am sure it will kill you too. It is calling for people's attentions, it is calling all those phonies and it makes me wonder if anyone really cares about me. I am sure it will make you feel the same way too. The next song I chose was "Through the Glass" by Stone Sour. I think that this song is talking about an insider who became a stranger and now they are looking from the outside back in. ...read more.

You were both too young to fully understand the connection that you both had. Now, I think you are old and mature enough to understand it and your relationship with Jane should mean even more if you tell her how you feel. The next song, however, is not about Jane. It is about High School, hence the name "High School Low" by Say Anything. Just like you, the guy in the song is sixteen. He is also worrying about things such as the whole high school experience, and girls. I find there is even a connection to you when he says, "My teacher says that I'm brilliant". It reminds me of how Mr. Spencer would try and get the best out of you. He did not say you were brilliant, however, he acknowledge that you had so much more potential than the one you were showing with your poor grades and test scores. The passage about looking at pictures of himself when he was a child can also be compared to you. I know that you have often thought about how it is such a horrible experience having to grow up and all, but we will get to this topic later. To do with the whole grades issue, he also says "My grades look pretty damn low. I want to motivate myself, but how the hell am I supposed to work". This is something that is so similar to you that it could have come out of your mouth. At the same time that you realize that your grades are low and you need to make an effort, you don't know how to. You are confused about what you should do that would motivate yourself. I remember you told me that when your psychoanalyst asked you if you would apply yourself when you got back to school in September you said you did not know. ...read more.

The people who are a melody are the ones, like Jane, who come every once in a while and they completely change how you were before, just like the melody of a song. The "melodies" of someone's life are not always there, but we can never be the same after they leave. Finally, the beat is a symbol for the people who are there to support you in your life constantly, just like the beat in a song. It is also impossible to be the same without the "beats" of our life, such as Phoebe, because they are the ones that we can call whenever we need. I think you will really enjoy the next song I picked. It is called "Marching Bands of Manhattan" by Death Cab for Cutie. First of all, the main reason of why it reminds me of you is the whole New York experience. I know how much that city describes you. I am sorry but I will have to bring old Jane up once again. I think that this song is mostly talking about how he wants to be with someone that doesn't know how they feel. I think that this is your type of song, and I hope you will like it. If you like it, you should look up more songs by Death Cab for Cutie, they all send like this and have wonderful lyrics. Well, this is pretty much all, I hope you enjoyed the songs I chose and you will take some of the advice I gave you. Remember to get back to me and tell me what you thought of them. Oh! Also, I hope you like the cover for the CD! I know how crazy you have been about those ducks on Central Park and I just thought you would enjoy that. Love, Deb P.S. The two other songs I added were songs I found searching on the internet that were inspired by The Catcher in the Rye and I thought that they would be interesting to add. ...read more.