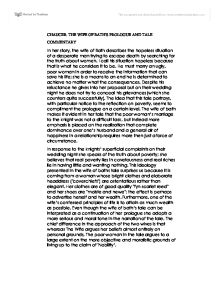 CHAUCER: THE WIFE OF BATH'S PROLOGUE AND TALE COMMENTARY In her story, the wife of Bath describes the hopeless situation of a desperate man trying to escape death by searching for the truth about women. I call his situation hopeless because that is what he considers it to be. He must marry an ugly, poor woman in order to receive the information that can save his life; she is a means to an end he is determined to achieve no matter what the consequences. Despite his reluctance he gives into her proposal but on their wedding night he does not try to conceal his grievances (which she counters quite successfully). The idea that this tale portrays, with particular notice to the reflection on poverty, seems to compliment the prologue on a certain level. The wife of bath makes it evident in her tale that the poor woman's marriage to the knight was not a difficult task, but instead more emphasis ...read more.

The chief difference in the approach of the two wives is that whereas The Wife argues her beliefs almost entirely on personal grounds, The poor woman in the tale argues to a large extent on the more objective and moralistic grounds of living up to the claim of 'Nobility'. Based even just on her introduction via the Prologue to the Wife of Bath's Tale, it appears from the onset that The Wife of Bath simply uses her sexual attributes for personal gain instead of trying to prove her equal status. In general, this female character stereotype could be seen as a parody of sorts since she embodies a number of negative female characteristics including stupidity and arrogance; deceitfulness, and lewdness. Although she is striking back at men it does not seem to be for any deeper reason other than personal profit. ...read more.

Even though the desire for sovereignty in a relationship is still evident in both the wives, the means to achieve it have become more moralistic and sophisticated. The idea's presented in her arguments have a logical flow. She starts very softly with a strong comparison between the virtues of being poor with a historical figure who is believed to encompass all that is good in people. She does not force her beliefs on the listener but instead she makes her point more objective by making her statement independent of the individual: "The hye God, on whom that we bileeve". Through the use of the phrase "hye God" she has attatched sacredness to what she is proclaiming and the use of the word "we" makes it evident that this is not an indoctrination of her personal beliefs but simply a reiteration of a belief that both parties hold. ...read more.