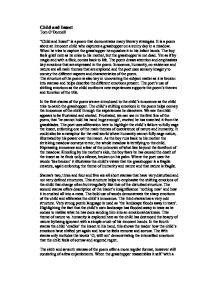 Child and Insect Tom O'Donnell "Child and Insect" is a poem that demonstrates many literary strategies. It is a poem about an innocent child who captures a grasshopper on a sunny day in a meadow. When he tries to capture the grasshopper he squashes it in his infant hands. The boy feels grief next as he cries to his mother, but the grasshopper is not dead. Yet as if by magic and with a flick, comes back to life. The poem draws attention and emphasizes key emotions that are expressed in the poem. Innocence, humanity, co-existence and nature are all main themes that are explored and the poet uses sensory imagery to convey the different aspects and characteristics of the poem. The structure of the poem is also key in uncovering the subject matter as it is broken into stanzas and helps describe the different emotions present. The poet's use of shifting emotions as the child confronts new experiences supports the poem's themes and function of the title. ...read more.

The second stanza offers description of the insect's insignificance 'nothing now' and how it is crushed all into a mess. The bold use of words demonstrates the sharp emotions of the child and alliterates the child's innocence. The third stanza has a very odd structure. Very strong poetic language is used as 'the landscape floods away in tears'. Highlighting the fact that the child's own landscape has flooded away in tears as he comes to realize what he has done sending him into an emotional darkness. This theme of nature vs. humanity is explored here as the child has destroyed the beauty of nature by being ignorant with a simple crush of his innocent hands. In the fourth stanza the child 'cradles' the insect in his hand, this shows the reader how the child's emotions have shifted yet again and how he feels remorse and sorrow. The fifth stanza only includes the words 'O, will not' demonstrating the intensified emotions that the child feels of sorrow and angered regret. ...read more.

This powerful sentence shows a liking to power over the creature and also a power over nature itself. Representing humanity the boy believes he has the power to do what he wants and 'shatter it' a powerful word for kill, because it left him 'so naked' and hurt. Throughout this poem there are multiple themes embedded. Humanity challenging nature and how it believes that it controls it. When really humanity co-exists with nature and should be so ignorant to the wisdom and experiences that is offered to it. The theme of innocence and experience is also explored as an innocent boy is confronted with new knowledge and grasping the new experiences. Even though the child is portrayed as young and inexperience, he expresses the shifting of his emotions from happiness to sadness, lightness to darkness. The child's shifting emotions helps to portray his innocence while the insect's gracefulness and the mother's wisdom illustrate their experience. The use of sensory imagery is an important theme that the poet conveys to really emphasize the emotions, structure and message of the poem. ...read more.