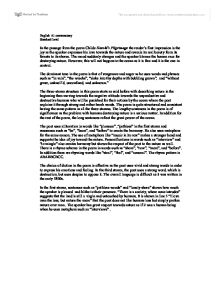 English A1 commentary Standard level In the passage from the poem Childe Harold's Pilgrimage the reader's first impression is the joy as the speaker expresses his love towards the nature and reveals its real beauty from its forests to its shores. The mood suddenly changes and the speaker blames the human race for destroying nature. However, this will not happen to the ocean as it is free and it is the one in control. The dominant tone in the poem is that of vengeance and anger as he uses words and phrases such as "in vain", "the wrecks", "sinks into thy depths with bubbling grown", and "without grave, unknell'd, unconfined, and unknown." The three-stanza structure in this poem starts as said before with describing nature in the beginning then moving towards the negative attitude towards the unproductive and destructive humans who will be punished for their actions by the ocean where the poet explains it through strong and rather harsh words. ...read more.

There is a rhyme scheme in the poem in words such as "shore", "roar", "more", and "before". In addition there are rhyming words like "steal", "feel", and "conceal". The rhyme pattern is ABABBCBCC. The choice of diction in the poem is effective as the poet uses vivid and strong words in order to express his emotions and feeling. In the third stanza, the poet uses a strong word, which is destruction, but uses despise to oppose it. The overall language is difficult as it was written in the early 1800s. In the first stanza, sentences such as "pathless woods" and "lonely shore" shows how much the speaker is pleased and blithe to their presence. "There is a society, where none intrudes" suggests that the land is still a virgin and untouched by humans. ...read more.

In the final stanza, the speaker clarifies how people can easily trace the ground and that the land "are not a spoil" for humans. It is impossible for humankind to leave a trace or affect the water in any way as its power is massive and will play them as said "shivering in thy playful spray". Man will suffer and will howl "to his Gods" and hope for any "near port or bay" to save them. The ocean will then throw them back and wash them to land where they will lay , "there let him lay" after they have their suffering. The passage illustrates the extreme power of the ocean, which leaves humans vulnerable, hoping for even a glimpse of light, which they will not see. The ocean will avenge the damage caused by the humankind to the nature and no one could harm the sea instead will be the victim of the "deep" and "dark" ocean. ?? ?? ?? ?? ...read more.