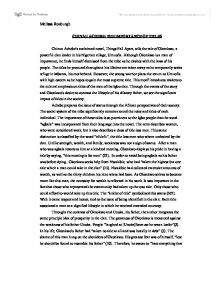 CHINAU ACHEBE: THE IMPORTANCE OF TITLES

CHINAU ACHEBE: THE IMPORTANCE OF TITLES Chinua Achebe's acclaimed novel, Things Fall Apart, tells the tale of Okonkwo, a powerful clan leader in his Nigerian village, Umuofia. Although Okonkwo is a man of importance, he finds himself dismissed from the tribe as he clashes with the laws of his people. The titles he procured throughout his lifetime are taken away as he temporarily seeks refuge in Mbanta, his motherland. However, the strong warrior plans the return to Umuofia with high esteem as he hopes to gain the most supreme title. This motif introduces readers to the cultural emphasis on titles of the men of the Igbo clan. Through the events of the story and Okonkwo's desire to contrast the lifestyle of his dilatory father, we see the significant impact of titles in the society. Achebe prepares the issue of status through the African perspectives of their society. ...read more.

As Okonkwo strives to become more like this man, the necessity for wealth is reflected in his work. It was important in the fact that those who represented the community had taken up the ozo title. Only those who could afford to would take up this title. The "anklet of title" symbolized this status (167). With it came respect and honor, tied to the issue of being identified in the clan. Each title associated a man to a dignified lifestyle in which he received extended courtesy. Throught the contrast of Oknokwo and Unoka, his father, the author integrates the same principle idea of prosperity in the clan. The greatness of Okonkwo is measured against the weakness of his father Unoka. People "laughed at [Unoka] because he was a loafer"(3). In his life, Okonkwo's father had "taken no title at all and was heavily in debt" (5). The shame of this man hung on the shoulders of Okonkwo. ...read more.

The impact of the missionaries in the life of Umuoifia is unappreciated by the men of high status. The elders even "offered them as much of the Evil Forest as they cared to take" (130). Death was essentially the outcome of the Evil Forest. This offer not only displays the elder's dislike towards the missionaries, but it is also a form of mockery at the missionaries' ignorance. The value of the leader's accomplishments are undermined, and all the importance that their titles held becomes insignificant when the white men appear. Okonkwo fears that his justifications for the killing of Ikemefuna, and the rejection of Nwoye would be insubstantial. The missionaries who draw away the classes of people, whom Okonkwo had overpowered, threaten his prestige. The fear of failure, implemented by his father's weakness, and the social system in which the story revolves around, reveal the Nigerian way of life. It is by social systems that Umuofia is oriented. Achebe uses this and the African perspectives of culture to build the character of Okonkwo, and accentuate the importance of power and prestige in tribal villages. Melissa Roxburgh ...read more.