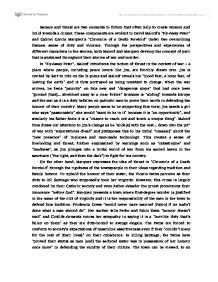 Menace and threat are two elements in fiction that often help to create tension and build towards a climax. These components are evident in David Malouf's "Fly Away Peter" and Gabriel Garcia Marquez's "Chronicle of a Death Foretold" under two overarching themes: sense of duty and violence. Through the perspectives and experiences of different characters in the stories, both Malouf and Marquez develop the concept of peril that is sustained throughout their stories of war and murder. In "Fly Away Peter", Malouf introduces the notion of threat in the context of war - a place where people, including peace lovers like Jim, are forcibly drawn into. Jim is invited by Bert to ride on the bi-plane and Malouf reveals his "blood fear, a bone fear, of leaving the earth" and is thus portrayed as being resistant to change. When the war arrives, he feels "panicky" on this new and "dangerous slope" that had once been "ground [that]... stretched away to a clear future" Brisbane is "sliding" towards Europe and the war as it is a duty befallen on patriotic men to prove their worth in defending the honour of their country. ...read more.

In killing Santiago, the twins have "proved their status as men [and] the seduced sister was in possession of her honour once more" in defending the validity of their culture. The town can be viewed, to an extent, as dysfunctional and a tense atmosphere is present throughout the book as readers know the threat of this cult will result in an innocent man's death. The theme of violence is exemplified in many characters and through the eyes of Jim, we see the menace posed in Man's capacity to cause suffering and death in "Fly Away Peter". Even before the war, violence is hinted as being part of daily life when Jim witnesses the killing of a lone man "with his hands over his face with blood between them" as "another figure, hurling itself from the shadows, brought him down". Although Jim has always been consciously rejecting any notions of violence, he discovers "black anger" in himself and a potential for violence when he faces Wizzer's bullying later. He is shaken to realize that he has come "closer to his father's [similar] nature" of violence unwittingly to the extent that he does not wish "to be confronted with some depth in himself... ...read more.

up to his hairline" and Father Amador remarks "it was as if we killed him all over again after he was dead". Through the use of violence in the lives of common people and graphic imagery illustrating the aftermath of a murder, Santiago's killing mirrors the menace in which the town is under in their acceptance of the idea of violence. The themes of male duty and violence in both "Fly Away Peter" and "Chronicle of a Death Foretold" develop the concepts of threat and menace. Malouf uses Jim's dilemma in enlisting for the war to highlight the threat of the blind trend in which men fight to prove their masculinity even though it results in countless lives lost and Jim's experiences in the war that draw on the idea of menace in the form of violence. Conversely, Marquez develops the notion of threat through the tradition of the town surrounding Angela Vicario's enigmatic predicament which precipitates the menace of Santiago's murder wherein violence plays an important role. A tense and portentous atmosphere is thus crafted in both books as the authors expand on these themes, building up to a final climax. ...read more.