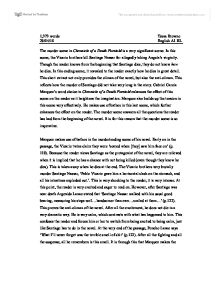 Chronicle of a Death Foretold

1,373 words Tessa Browne 29/04/10 English A1 HL The murder scene in Chronicle of a Death Foretold is a very significant scene. In this scene, the Vicario brothers kill Santiago Nassar for allegedly taking Angela's virginity. Though the reader knows from the beginning that Santiago dies, they do not know how he dies. In this ending scene, it revealed to the reader exactly how he dies in great detail. This short extract not only provides the climax of the novel, but also the anti-climax. This reflects how the murder of Santiago did not take very long in the story. Gabriel Garcia Marquez's word choice in Chronicle of a Death Foretold enhances the effect of this scene on the reader as it heightens the imagination. Marquez also builds up the tension in this scene very effectively. He makes use of bathos in this last scene, which further enhances the effect on the reader. The murder scene answers all the questions the reader has had from the beginning of the novel. It is for this reason that the murder scene is so imperative. Marquez makes use of bathos in the murder/ending scene of his novel. Early on in the passage, the Vicario twins claim they were 'scared when [they] saw him face on' (p. ...read more.

(p.121). When one reads this out loud, it is almost as if they are panting just like Santiago is. It also speeds the reading up, creating excitement and tension within the reader. This creates a connection between the reader and Santiago, which makes his death all the more tragic. This highlights the brutality of the murder. '...all his intestines exploded out.' (p.121). The word 'exploded' stands out in the quotation. It is a very strong, shocking word to use. His intestines most likely didn't explode out. Because though it is an exaggeration, the intensity of the situation is further emphasized. In Chronicle of a Death Foretold, Marquez uses suspense/tension to keep the reader engaged in the murder scene. It is worth noting that this is very hard to achieve as the reader already knows the outcome. In order for the reader to be truly shocked and excited, Marquez needs to have quite a notable death scene. Suspense and tension evolve into confusion within the reader in this scene. It is through confusion that tension is built. Divina Flor claims she saw Santiago 'wearing a white suit...[carrying] a bouquet of roses.' At this point, the tension and suspense evolve into frustration. This does not happen in real life, it happens in Divina's head. ...read more.

This creates tension because the reader is waiting for someone to realize that Santiago is going to be murdered and try and stop it. On page 119, Santiago lets out a cry of pain that 'everybody heard'. This portrays just how painful it was as everyone heard. This, of course, is an exaggeration but still creates suspense nonetheless. When he screams for his mother, ' "Oh, mother of mine!" ' (p.119), it is quite ironic. Indirectly, his mother is the reason he dies because she locks the door. Because the reader experiences the story through the narrator and the narrator was Santiago's best friend, we form a connection with Santiago. However; the narrator does not seem that emotionally involved in Santiago's death even though he's supposed to care for him a great deal. This could be because it has been such a long time since the death and he has moved on. It is slightly strange that he isn't very connected with the emotional side of his best friend's death. This, again, creates confusion in the reader, building tension. The murder scene is probably the most prominent section of the novel. It provides the climax and the anti-climax. Through Marquez's use of suspense, bathos, word choice and other techniques, the reader feels the effect of the murder. The reader views the ending as quite tragic as we have a bond with Santiago. This scene evokes many feelings in the reader including empathy and succeeds in making this scene very important. ...read more.